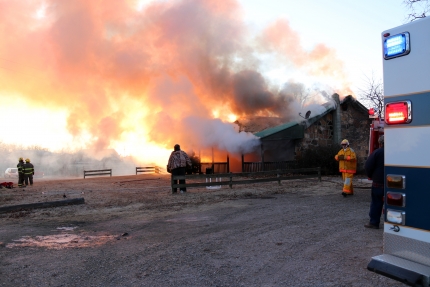 A New Year’s Day fire destroyed this older rock home on the Howards Ridge farm owned by Stan and Janet Taber of Almartha. Sam Overturf, who was renting the house, was not home when the fire started. Volunteers from six area fire departments responded to the blaze, working several hours in bone-chilling, sub-freezing temperatures to contain the fire and keep it from spreading to nearby hay barns and other structures. Times photo / Sue Ann Jones.

Fire destroyed a Howards Ridge home Monday evening, bringing firefighters from six area fire departments to battle the blaze in sub-freezing temperatures. Ozark County Ambulance also responded to the scene, where an unidentified firefighter slipped from a ladder but, after attention from the medical team, declined transport. The Missouri Department of Transportation was also dispatched to treat sections of J Highway adjoining the fire scene that became icy when water from the firefighting efforts froze on the pavement.

The older rock-faced home, part of the Howards Ridge farm owned by Stan and Janet Taber of Almartha, was rented to Sam Overturf, who was not in the house when the fire started. The blaze totally destroyed the house – and all of Overturf’s belongings inside.

It’s thought that workers’ efforts using a propane heater to thaw frozen water pipes in the home earlier Monday may have caused the blaze.

Lick Creek Volunteer Fire Department was dispatched at 3:58 p.m., and mutual aid was provided by volunteer firefighters from Tecumseh, Gainesville, Caney Mountain and Timber Knob, as well as Clarkridge, Arkansas. Responding to the call, a CMVFD firetruck driven by fire chief Bob Peat collided with a private vehicle at Highway 181 and Bulldog Drive. No injuries were reported, and details of the incident were unavailable at press time. The CMVFD truck eventually continued on to the fire scene.

The volunteers worked several hours in bone-chilling temperatures to put out the fire and keep it from spreading to nearby hay barns and other structures. The last firefighters from LCVFD cleared the scene at 10:14 p.m., when temperatures had fallen into the single digits.