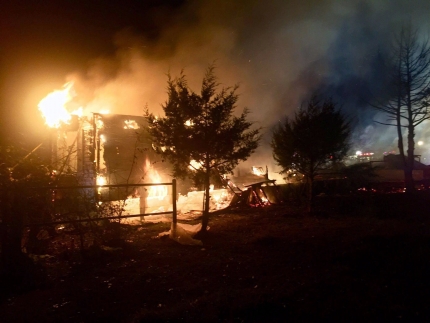 Thirty-eight firefighters from seven area volunteer fire departments battled a mobile home Friday evening on County Road 506 off T Highway. The residents, Ronald and Reina McCullough and their two sons, were away when the fire broke out, completely destroying their home. Photo courtesy Khristie Jacquin, PPPVFD. 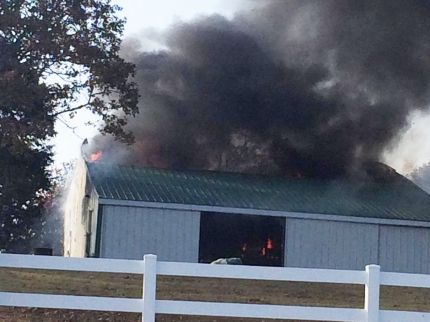 Several vehicles and a large collection of service station items were destroyed in a Friday fire at the home of Gene and Gay Strong on the west side of Gainesville. Although Gene was in the building when the fire started, he was able to get out without injury. Photo courtesy Charlene Schlotzhauer.

Area firefighters battled two structure fires in the Gainesville area during the past week.

A fire late Thursday on the west side of town Gainesville destroyed a large garage at the home of Gay and Gene Strong. Gay told the Times that her husband, Gene, was in the garage when the fire broke out, but he got out safely with no injuries. The Gainesville Fire Department responded with assistance from several other area departments.

Gay said the fire destroyed a 1966 Mustang, a Honda two-wheeler, three-wheeler and a side-by-side plus a large number of collectible service station items.

She said they thought the fire may have started when a four-wheeler backfired inside the garage, igniting nearby materials.

The mobile home’s occupants, Ronnie and Reina McCullough and their sons, were in Branson when the fire started.  Ronnie told the Times Tuesday they owned the home but had no insurance. He said he hopes they had eventually move another home onto the site. Timber Knob Volunteer Fire Department responded to the fire, assisted by Gainesville, Pontiac-Price Place and Lick Creek, as well as Arkansas departments from Midway, Oakland and Promiseland. TKVFD chief Nancy Winslow said it’s thought the fire started due to an electrical issue.

PPPVFD firefighter Sharon Davidson said a sheriff’s deputy, first on the scene, was able to save the family’s truck and mower. A relative shared this list of clothing needs for the family, and Angie Burke said items can be dropped off at the Gainesville License Office on First Street for delivery to the family: Peyton (age 4): size 11 shoes, size 5T shirts and pants (he loves Paw Patrol underwear). Gage (age 7): size 1 shoes, size 7/8 slim shirts/pants:  size 6 boxers (Gage has autism and likes dogs and appreciates soft things.) Reina: size 9 shoes, size 22 pants, size 2X shirts. Ronnie: size 13 shoes (he works in a sawmill and his steel-toed boots were destroyed), size 36x36 pants and size 2XL shirts.