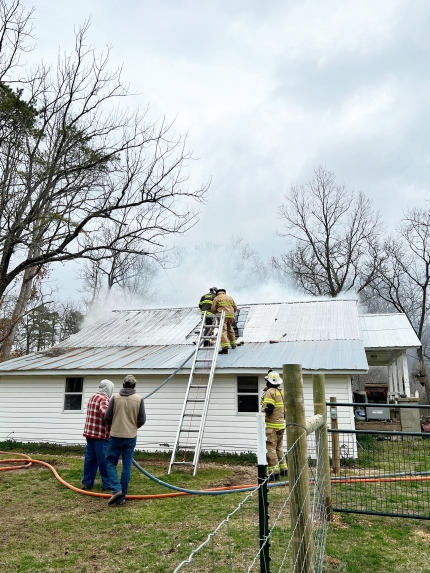 Beth and Andy Schultz’s home on County Road 142 in the Wasola area was extensively damaged after a fire broke out in the home’s attic March 24.

Wasola residents Beth and Andy Schultz and their 13-year-old daughter Ella have had a heartbreaking week after a fire broke out in the attic of their 90-year-old home on County Road 142 in Wasola last week, causing extensive damage to the structure.

“After living in Oregon for 27 years, [the Schultzs] had just celebrated the one year anniversary in their home in Wasola…” a Go Fund Me page setup by Beth’s sister Jen Shimek explains. “…Their attic started on fire, and it spread through the walls. Andy, Beth and Ella, along with their three dogs, were able to get out of the house and call 911. We are forever grateful that they are safe.”

After about 10 minutes of attempting to dispatch the other departments, Gainesville VFD was dispatched to the fire and responded with volunteer firefighters from that district heading toward the home. Caney Mountain, Squires and Lick Creek VFDs were also called out for mutual aid and responded.

The home is located a considerable distance from the responding departments’ firehouses, and it took about 50 minutes for firefighters to arrive on scene after the call first came into the dispatch office.

Firefighters battled the blaze and saved the structure before it burned to the ground.

“Great job by all that were there,” said Gainesville fire chief Ed Doiron. “The house was still standing.”

Despite the good news that the home was not burned to the ground, the Schultzs have been suffering the aftermath of realizing that smoke and water damage destroyed most of the family’s belongings. But they say they’ve really been blessed with thoughtful neighbors and community members who have helped in so many ways.

“We give all the glory to God for keeping us all safe, including the firefighters and our animals. We have been blessed by the community… neighbors coming to our aid with food, clothes, donations and an RV to stay in while we rebuild,” Beth told the Times Monday. “I want to thank the firefighters, the Ozark County Sheriff and EMTs for coming to assist us. Ozark County is a wonderful place to live!”

At presstime Tuesday just over $3,500 had been raised for the family through the Go Fund Me page. To donate, visit Gofundme.com and search for “The Schultz Family Fire.”