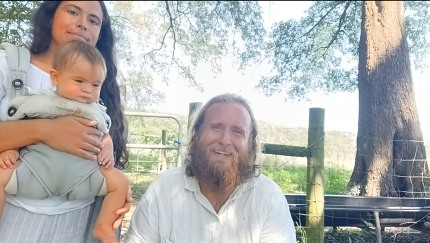 Justin Ruggles recently released a video to explain why he and wife Jennifer, along with their infant son Barakah, had been out of contact with family members for a couple months, which led to a missing persons report filed at the Ozark County Sheriff’s Department. The video is posted on a Facebook page titled, “Way of the Messiah” and can be viewed by visiting facebook.com/wayofthemessiah. The family says they are safe and happy and apologized for causing concern and worry to those looking for them.

Justin Ruggles, the 32-year-old man who was the recent subject of a missing persons search by the Ozark County Sheriff’s Office, along with wife 30-year-old Jennifer and infant son Barakah, released a video this week to try and help explain the reason why the family was out of touch with family members and others for such a long period of time.

The video was posted to a Facebook page titled, “Way of the Messiah,” on Monday, June 6. It can be viewed in its 31 minute entirety by visiting facebook.com/wayofthemessiah.

The Ozark County Sheriff’s Department launched a missing persons investigation into the Ruggles family on May 5 after family members reported that they hadn’t heard from the family since March.

After a three week search involving several state law enforcement agencies, the Federal Bureau of Investigations and the U.S. Secret Service, the family was traced and found at a short term AirBnB rental home in Florida in late May.

“We came out of the Everglades recently, and we saw that a lot of news spread about what was going on with us and our whereabouts, and I wanted to make this video to respond to everybody who was trying to find us and express that me and my wife, we are truly sorry for all of the emotions that we probably stirred up and the anxiety that we created in people. It wasn’t our intention,” Justin explains in the video.

“We felt led to get away for awhile, and we ended up in the Everglades National Forest. We were camping down there, and there wasn’t any signal. So we didn’t really have access to cell phones or tablets or other things that people use. I first wanted to apologize for the emotion we created...

“...we were not trying to hurt anybody or anything like that.”

During the video, Justin speaks for about 30 minutes about their absence and the way they’ve redirected their lives toward their faith and left many of the modern ways of life - cell phones, TVs, fast food and other distractions - behind them.

Although Justin is the only family member who speaks at length during the video, he takes a moment shortly after the video begins to allow a smiling Jennifer and Barakah to walk into the video frame, wave at the camera and say hello to viewers.

“To share a little bit about myself and where I come from is that I grew up in a rough house...” Justin says in the video. “When I chose to choose the son of God, the Messiah, and have a personal relationship with him, he began to change my life. Living the childhood that I did, I spent my twenties lost and confused...”

Justin says that he has been led into a stronger faith that has transformed his life into a happier and more peaceful one.

“The creator of the universe actually did respond and started leading me down a path of the truth of what this reality actually is... I was so excited to know that there was a creator, and he does talk to people, and he desires to know them and be close to them. You don’t need to be a part of a church or an assembly or what a lot of people like to call simply a cult. Actually, it’s something you can do in the privacy of your own home with him all by yourself, if you really wanted to. You could be alone with him, and he will comfort you and heal you and love on you in the way that our parents never could, our siblings never could.”

Justin says in the video that he struggled with “every type of addiction you could think of” in his twenties to deal with the pain. He says his faith has now freed him of those vices, and he lives a happy life.

He addresses the comments on many news outlet’s social media posts that were sometimes hurtful about the family’s intentions.

“There’s a beautiful life out here that exists..” Justin says. “...me and my family have every right to live this way, just as you have the right to live the life you are.  I love you guys in Missouri, really all over the world, the people who are concerned about us but have a lot more understanding just about us desiring to be alone. Thank you.”