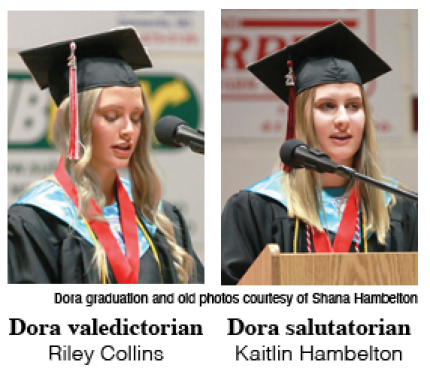 Dora, the first of Ozark County’s four high schools to hold its graduation, originally planned to hold the graduation ceremony outside on the school’s baseball field; however, it was announced last Friday that the event would instead be held inside the gym because the weather forecast included a 70 percent chance of rain for the scheduled 7 p.m. event.

This year’s valedictorian, Riley Collins, daughter of Scott and Retta Collins, and salutatorian, Kaitlin Hambelton, daughter of Shawn and Shana Hambelton, were recognized for their academic achievements. Each gave a short speech to their fellow classmates.

The girls, who are cousins, both plan to attend Missouri State University-West Plains in the upcoming semester. Collins plans to pursue a business degree, and Kaitlin hopes to transfer to a chiropractic school within Logan University after her first year at MSU-WP.

Greg Martin, Dora resident and owner of the security training company Shield Solutions, gave this year’s commencement address. The 2021 ceremony was especially meaningful for Martin as his son Gavin was among the graduates.

This year’s ceremony was a welcome return to Ozark County’s traditional graduation season, following last year when plans had to be heavily altered and delayed until late June due to the covid-19 pandemic.