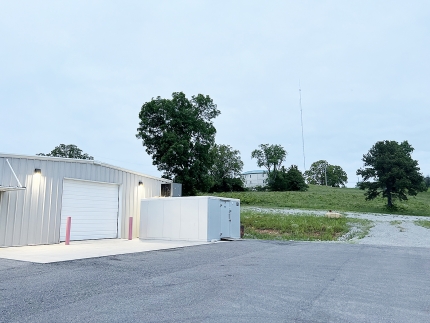 Times photo/Bruce Roberts Ozark County Commissioners are considering building a new road in order to combat traffic congestion on Highway 160 at the Ozark County Food Pantry, west of downtown Gainesville. During the two Wednesdays a month the pantry distributes food to more than 100 of Ozark County families, traffic is backed up on the shoulder of Highway 160 at the pantry site. The congestion has led to some minor accidents and the need for sending an Ozark County deputy to direct traffic, taking the officer away from other duties. The proposed road would start on County Road 806 (old Highway 160) near the Ozark County jail and travel down the hill to the food pantry.

“The traffic on 160 there gets backed up on the shoulder and there have been a few minor fender-benders there,” said Presiding Commissioner John Turner.

Turner said the county has also been having to send officers to the area to direct traffic during food distribution days, which pulls them away from other duties.

The Ozark County Food Pantry is located on Highway 160 west of Gainesville, and on distribution days, the vehicle traffic of people waiting for food backs up on the westbound shoulder of the highway.

“Sometimes it’s backed up all the way over the hill,” said Western District Commissioner Layne Nance.

Commissioners discussed the idea of putting a new road in from Old Highway 160 (County Road 806) near the jail and making it a two-lane, one-way road down the hill to the food pantry location. The issue was discussed at the commissioners’ May 16 meeting and was brought up again Monday at their regular weekly meeting.

“People would come in off Old Highway 160 and they could come down there in two lanes and then come out on Highway 160 after they pick up their food,” Turner said. “That entrance at the food pantry would be for outlet only … no entry,” he added.

Turner said the county is working on getting an estimate for bulldozer work to “cut” the new road in. The county owns all of the property from next to the sheriff’s department to the food pantry.

“We could finish it with our road graders, and we’d probably have to put in a couple culverts, but the county doesn’t own a bulldozer, so we’d have to hire that out,” Turner said.

Turner said a final decision on the proposal would come after the county determines the cost.

Generator for the courthouse?

In other business, commissioners talked about the idea of installing a backup power generator that would run the courthouse if electrical power was knocked out.

County Clerk Brian Wise brought up the idea of installing a generator that would run off propane that could power the entire courthouse if power goes out.

“I like the idea,” said Turner. “You never know if there’s an ice storm or tornado or whatever, we could be without power for several days.”

Turner said he was going to look into the matter, and check and see if the county could possibly get a grant to cover the cost.

“I’ll check with SCOCOG (South Central Ozarks Council of Governments) and see if there is some kind of grant or funding available for it,” Turner said.

“It would be great to have a backup generator, especially since the courthouse is a public storm shelter,” Turner said.

• Commissioners also discussed upcoming holidays and when the courthouse would be closed.

Turner said the courthouse will be closed on Monday, May 30, in observance of Memorial Day. Commissioners will hold their regular meeting that week on Tuesday, May 31. The meeting, which is open to the public, will be at 9 a.m. on the second floor of the Ozark County Courthouse. Commissioners also discussed, but tabled, whether or not to close on the Monday following Juneteenth, which falls this year on Sunday, June 19. The holiday is a new state-celebrated holiday, but commissioners aren’t sure if the courthouse will close or just state offices.

• The new automatic doors on the west side of the courthouse are now fully operational after a couple hiccups during installation. The doors use a motion sensor and open automatically. The doors were purchased using money the county received from the American Recovery Plan Act (ARPA), which is federal covid-19 relief funding.