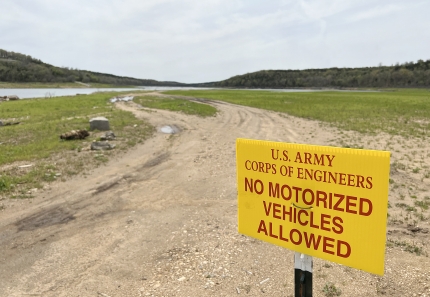 Times photo/Bruce Roberts The U.S. Army Corps of Engineers has put up signs and stepped up enforcement of laws prohibiting motorized vehicles along Bull Shoals and Norfork Lakes, including Haskins Ford (shown above and below). 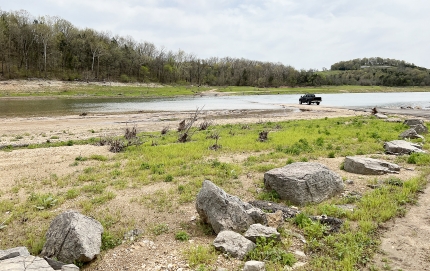 Times photo/Bruce Roberts A truck stops at the flooded Haskins Ford Monday. County commissioners say they are keeping an eye on the lake level to see if they need to close the road.

County Commissioners are asking Ozark County residents for a little patience on spring road work, as county road crews are scrambling with a short staff to work on county roads in between rains and storms.

“We just ask that people have a little patience, we’re doing the best we can do,” said Western District Commissioner Layne Nance.

Nance said the west side is down two equipment operators, and they have had part-time employees working on the weekends to try and catch up.

“We have two open positions, and nobody seems to want to do it,” Nance said, adding that he has been running a road grader himself two to three days a week.

On the east side, commissioner Gary Collins said that while he doesn’t have a crew shortage right now, his issue is that two graders are in the shop for warranty repairs.

The commissioners discussed the issue during their regular weekly meeting Monday morning at the courthouse. The commissioners meet every Monday at 9 a.m. The meetings are open to the public.

In a discussion about Haskins Ford, commissioners talked about recent U.S. Army Corps of Engineers stepped up enforcement along the shoreline in the area, including new signs restricting motorized vehicles.

“There’s always been vehicles going in there [in the Haskins Ford area] and four wheelers and such,” Nance said. “But the Corps said not anymore.”

Nance said some of his constituents had reported seeing Corps officials writing tickets over the weekend.

The Ozark County Sheriff’s Department received multiple calls from residents about people riding ATVs on Corps land along County Road 863 in the Haskins Ford area. Sheriff’s officials contacted the Corps, according to a sheriff’s report.

Mark Case, Chief Ranger for the Corps, told the Times that they regularly patrol the shorelines and enforce federal law that prohibits the operation of motor vehicles on public land surrounding Bull Shoals and Norfork Lakes.

“We do ramp up the enforcement efforts as the weather warms up,” Case said. “In order to protect the public land,  we sign areas that have a history of off-road use, and the rangers enforce the regulations through written warnings and citations. The focus is to keep the vehicles on the roadways, which limits the damage to the public resources,” Case added.

He said he brought up a potential hazard of no reduced speed signs on the east side of the Tecumseh curves.

“It’s dangerous,” Turner said. “I came into those curves in my pickup recently at the speed limit [55] and I almost lost it. There really needs to be some signs up there.”

Turner said MoDOT officials said they would look into the matter.