Community baptism to be held at Pontiac Sunday 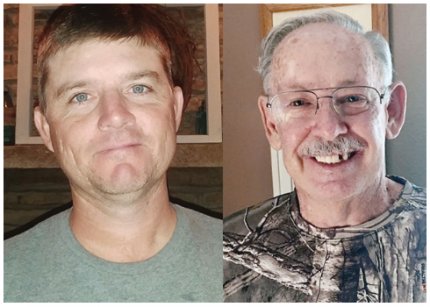 Times file photos Local pastor Davin Friend, left, and Theodosia area resident Michael Atkins are shown in these file photos from a story the Times published in 2018 when Friend rescued Atkins from drowning on Bull Shoals Lake at Theodosia. The two will reunite in Bull Shoals Lake Sunday, this time at Pontiac, when Friend baptizes Atkins at a community baptism. The event is open to all. It will be held from 1-3 p.m. Sunday at Pontiac Cove Marina.

Many longtime Ozarkers remember the days gone by of mass baptisms at area lakes and streams, and for a group of local Christians, they’re hoping to recreate the spiritual event with a community baptism planned for Sunday, June 5 at Pontiac Cove Marina on Bull Shoals Lake. The event will be 1 to 3 p.m. and is open to everyone.

Organizers say there will be food and fellowship before and after the baptisms, and hot dogs and potato chips will be provided. Participants are invited to bring side dishes if they would like. There will also be a time for singing and testimonies.

It’s no coincidence that the community baptism is on the Christian holiday of Pentecost. One of the organizers, Audrey Breedlove, said God had been dealing with her for about a year about baptism. She connected with another Christian, Annia Contreras, recently during a tent revival at Hardenville, and the two got together to begin organizing the community baptism.

Audrey chose the day of Pentecost because of its significance in the book of Acts as the birthday of the church. It was on the Jewish holiday of Pentecost in the book of Acts when about 120 Christian believers were praying in an upper room and the spirit of the Lord fell on them all. In chapter two, the apostle Peter stood up and preached what many believed was the first church sermon on how to be saved. He told the people to “repent and be baptized, every one of you in the name of Jesus Christ for the remission of sins and ye shall receive the gift of the Holy Ghost.”

“I felt that we should have it on Pentecost Sunday for two reasons,” Breedlove said. “The first being the obvious one, in Acts 2, that’s when they were baptized with The Holy Spirit and the Church began.”

Breedlove said the second reason is because June is considered “Pride Month” in the United States. “For us it has nothing at all to do with sexual orientation or preference. We believe anyone who calls on the name of the Lord will be saved. And Jesus loves us all the same,” Breedlove said. “Not one is worthy, not one. But pride is what we fight against on a daily basis.”

Contreras said that while attending the revival, “God laid his hands upon my back, literally. It was the greatest spirit-filled moment I have ever had,” she said. “If I had ever had a doubt before, he removed it all at that precise moment. So later He put into my mind and heart a baptism, and I felt I had to obey and listen. This wasn’t an in-church baptism but one created for all.”

The two have shared their idea with the Ozark County Ministerial Alliance, which has jumped on the bandwagon with many pastors planning to participate.

Reunited in the water

One local pastor, Davin Friend, who pastors at Lilly Ridge General Baptist Church, will be baptizing a man he saved from drowning in 2018.

“It’s kind of neat that me and him will be reunited in the waters of Bull Shoals Lake, but this time he will be baptizing me,” said Michael Atkins, who Friend saved from drowning at Theodosia in October 2018. “I’m going to tell him again this time to not let me go,” Atkins joked.

It was no joke in 2018, as Friend and his wife Kasey were on their way to a fish fry at Salem General Baptist Church in Ocie. As they approached the Theodosia bridge they noticed a boat floating loose on the lake - then spotted a man as he was going underwater.

That man was Atkins, who was returning from a fishing trip. He had tied his boat up at a courtesy dock, and it had come loose. Atkins got in the water and attempted to swim to the boat a short distance away, but the wake was taking the boat away from him.

“I realized I was in trouble, and my arms weren’t working like they should,” Atkins said. At the time Atkins was 66 years old.

“So he saved my life,” Atkins said. “And now it’s time to get serious about living for God. I’ve always been a believer.”

For Pastor Friend, that was the first question he asked Atkins when he helped pull him to safety on that warm October afternoon. “The Lord was watching over you today,” Friend told Atkins as they both worked to catch their breath, soaking wet. Normally I would have already been at the church by now.”

Friend explained that chores around the house ran a little longer than normal on that fateful day, and he was late leaving for the fish fry.

Since that day, Atkins has visited Friend’s church each year on the anniversary of the near-drowning and gives his testimony.

And on this coming Sunday, on the day of Pentecost, both Atkins and Friend will be joined in the waters of Bull Shoals Lake once again with Atkins being baptized by the man who saved him from drowning nearly four years ago.

“He saved my life,” Atkins said. “And I’m not just talking about the near drowning.”

This time around, Atkins and Friend will be surrounded by other believers and pastors and preachers, fulfilling the Christian command and tradition of baptism.