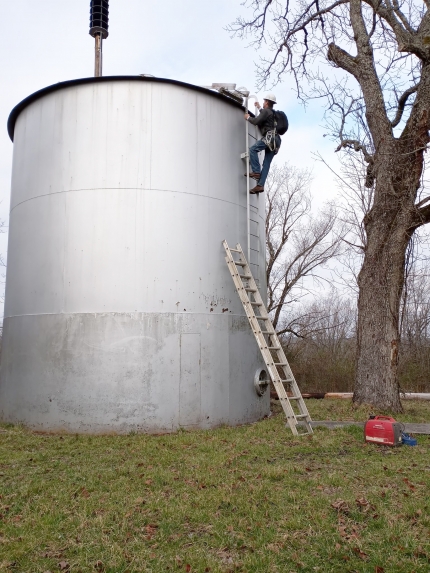 The center water tower was drained, disinfected and repaired March 8 by Ozark Applicators.

The center ward of the City of Gainesville underwent a water outage March 8 in order to have the city’s center water tower drained, cleaned and inspected. The city has three water towers that each house water for one of the three wards of Gainesville: east, center and west.

City water specialist Jessi Price told the Times that Ozark Applicators, a company from Van Buren, Missouri, completed the service as part of the company’s yearly inspection program that the municipality has opted into.

“They keep us on a yearly rotation, and it saves the city money,” Price explained. “Every year they will schedule a visual inspection for all [city water] towers and complete a wash-out on one tower until they are all brought up-to-date.”

The Department of Natural Resources, the organization that oversees water distribution at the city-level, requires that all city water towers be visually inspected every year and be emptied and cleaned every three to five years.

“We never know if the [water] tower will need repairs or how much will need to be done until we have it emptied and open,” she said. “We scheduled the water to be down from 7 a.m. to 4:30 p.m. just in case we needed the extra time.”

Price said the center water tower had a very small divot that was repaired during the inspection, and water service was turned back on about 10:30 a.m. that day.

“The tank was clean, meaning not much silt had built up inside the tower. Build up is normal with all well water, as it picks up sediment as it is pumped up from the ground. The tank was pressure-washed inside and disinfected before being filled,” she said.

Employees with Ozark Applicators also visually inspected and climbed up the east and west water towers while they were in Gainesville. Both of those towers were in compliance and had minimal updates installed. After the water was restored, the city enacted a boil advisory, which was required because the water was off and water pressure dropped during the time of the inspection and repair. The city sent away a water sample to the Department of Natural Resources. It contacted the city and informed Price that the boil advisory could be lifted on March 11.

“We used our Public Alert system to call, text and email all residents affected by this outage and boil advisory. We would like to remind everyone to keep us up-to-date on their current phone numbers and email addresses,” she said.

City residents can call City Hall at 417-679-4858 with the information or include it on their bill when they submit water and/or sewer payments.