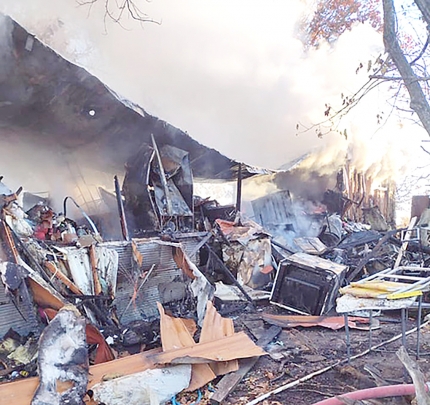 A mobile home owned by Laura June Mapes-Hensley at 40 Hensley Road, off County Road 546 in Caulfield, was lost in an early morning fire Friday, Nov. 19. The cause of the fire is thought to have been an electrical issue within the home.

According to the Ozark County Sheriff’s Department call log, the fire was first reported to the dispatch office at 5:17 a.m. Friday.

The Caulfield Volunteer Fire Department was dispatched as the primary department because the home is within the CVFD jurisdiction. Tecumseh and Bakersfield VFDs were also called to respond in mutual aid. The Ozark County Sheriff’s Department and Ozark County Ambulance also responded. One person was transported to Ozarks Healthcare in West Plains, the report says.

“We arrived to a fully involved trailer house fire. The female occupant got out of the house, but one [person] who lives on the property was transported from the scene by ambulance for possible smoke inhalation,” Caulfield VFD fire chief Shannon Sisney told the Times. “Two dogs were missing when fire personnel cleared the scene. The trailer and contents are a complete loss. Caulfield Fire [department] was able to locate a dresser full of old photographs that were removed and are salvageable.”

Caulfield VFD was the last to clear the scene at 1 p.m., nearly eight hours after the call was first received.

A real issue with communication

In a Facebook post a few hours after fighting the fire, Tecumseh VFD assistant fire chief J.B. Duke wrote that nine firefighters from the three volunteer fire departments worked to try to extinguish the fire, but they “should have had 20 or 30 [firefighters].”

Duke blamed the lack of response to a continuing issue area volunteer fire departments are facing now that involves poor communication and signal through their radio system. Three fellow volunteer firefighters posted comments on Duke’s post about the fire saying they never received the call on their radios.

Duke, who is president of the Ozark County Fire Chiefs Association, has been working with other fire chiefs in the county to try to find a way to upgrade the 13 fire departments’ radios and repeaters so they can easily receive the calls for service from the dispatch office through their radios.

Sisney agreed that the radio communication issue is a serious problem in Ozark County.

“We have major radio issues in Ozark County. There was around a seven-minute delay between the time of the call came  into the Ozark County Sheriff’s dispatch office and the time we were toned out,” he said, explaining that Caulfield’s service area covers parts of both Ozark and Howell county. “We need repeaters so my guys will be able to get the pages from Ozark County. We have to use in-car radios to talk to them, as the portable radios won’t work. It’s dangerous.”

Sisney says the department rarely has communication issues with the dispatch office in Howell County.

“Howell County has repeaters in Caulfield, and for the most part, we don’t have any issues… unless it’s a fluke. We have to get something done with those radios in Ozark County before someone gets seriously injured. . . . What if we roll up on a domestic [violence situation] or something like that, and we have no radio communications with the county? The radios are our lifeline. You take that away, and what do you have? A lot of these areas have little to no cell phone communication either,” Sisney explained.

“Our pagers are not trustworthy to receive signal,” Winrod said. “It’s much worse than it used to be.”

Winrod said that usually the firefighters hear a warning tone and then a message from the dispatcher detailing the call and where emergency personnel need to respond. But more times than not, the firefighters either hear only the tone and no message – or nothing at all.

Those who hear only the tone then have to call the dispatcher’s office on a cell phone to get information on the call and directions to the site. The dispatcher then has to relay that same information to each individual firefighter who calls in by cell phone.

“So her phone’s ringing off the hook, or the calls are backed up because we’re trying to figure out where we’re headed . . . and if she has something going on at the time, we don’t usually know that. So it takes even longer for her to be able to get us the information,” Winrod said.

Once firefighters are finally informed of the situation and location, they then have to use their cell phone to call their fellow volunteer firefighters to see if they got the call and the directions about where to respond.

“We usually do that, but this time we didn’t . . . and this is what happens. We only had three firefighters show up from Tecumseh. If they’d gotten the call, we would have had at least three others come too,” Winrod said.

“As a fire department, we get in a hurry to try to get on scene to protect life and property,” Duke said. “It’s pretty hard to make phone calls while we’re driving the fire trucks to the scene, just to try to get additional personnel [there].”