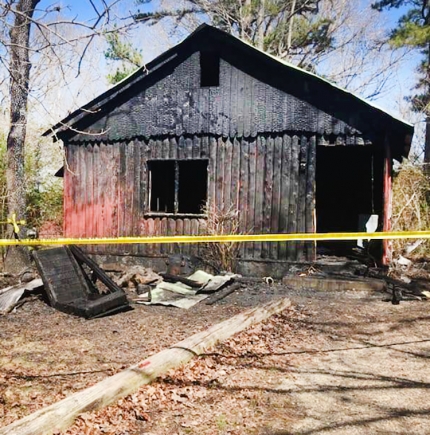 The property features several rental cabins situated near each other, visible from Highway 160. The fire broke out in cabin #4.

“With concerns of the fire spreading to other cabins and exposures due to the gusty winds, a blitz attack was executed resulting in a quick knock down of the fire,” the TAVFD posted on their Facebook page after the fire. “Thank you to Gainesville VFD, Ozark County Ambulance and OCSD [Ozark County Sheriff’s Department] for assistance.”

A “blitz attack” is a firefighting term that refers to a technique that includes a combination of both exterior water application and an interior offensive attack.

This week’s sheriff’s report indicates that when the call was first reported to the dispatch office, the caller indicated that a propane heater had started the fire.

Ozark County Sheriff’s Deputy Seth Miller spoke with the caller who said the cabin was not occupied and a hot water heater had been worked on the day before the fire, along with a small propane heater set on low.

There were no serious injuries reported.

Volunteer firefighters across the county have also been battling brush fires and out-of-control burns again this week. These fires are listed in the Ozark County Sheriff’s report.

• March 17, 1:36 p.m. - Vehicle accident and car on fire. Woman is out of the vehicle. Tecumseh VFD, South Howell Ambulance and MSHP responded.

• March 20, 8:04 p.m. – Brush fire on Aspen Drive. Dozer fire out of control and caught neighbor’s brush pile. Timber Knob VFD had no one available to respond, and Gainesville VFD was at another fire. Lick Creek VFD and Theodosia Area VFD responded.

• March 20, 9:24 p.m. – Barn fire on N Highway. OCSD officers made contact with the owners who said they were burning the fields and caught the barn on fire. OCSD and Caney Mountain VFD responded.

In addition to these fires, 41 residents called to notify the Ozark County Sheriff’s Department and firefighting agencies that they were conducting controlled burns. Those who are burning are asked to do the same, call the sheriff’s department at 417-679-4633 to report that you are conducting a controlled burn. This helps dispatchers avoid calling fire departments out to controlled burns when neighbors or passersby notice smoke and call the sheriff’s office to report a fire.

The busy spring fire season is a good reminder that residents should pay dues to their local volunteer fire department and help support the departments through donations and participating in fundraisers.

Dues, almost always under $100 per year per family, is one of the only ways local VFDs are able to buy gear and supplies used to fight fire in the county. Requests for dues are generally mailed once a year to members in the respective fire district.

Almost all firefighters in the county are unpaid volunteers, who often leave their homes and families no matter the time of day, to help neighbors and friends in their most dire times of need. With rising fuel prices and limited budgets, it’s often the volunteers who also pay for gas to get to and from fires, wrecks, first responder calls and other emergencies. The Times staff applauds the service these dedicated men and women provide.