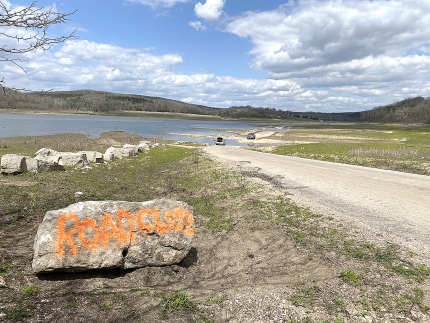 The Ozark County Commissioners had a relatively quick meeting Monday morning. Among the topics they discussed were the Haskins Ford crossing, Tuesday’s General Municipal Election and the recycling center.

“Well…I was just sitting here looking at the Bull Shoals Lake level. They’re dropping it fast right now,” Nance said, referring to his online check of the lake levels around 9 a.m. Monday. “It’s went down almost three and a half feet from what it was there last week. They pulled it hard this weekend.”

Nance said the drop in lake level could make Haskins Ford on County Road 863 passable in the next week or so. The ford crosses the upper stretches of Bull Shoals Lake.

“If it keeps dropping, I’d say in the next week to 10 days it should be crossable again - but that’s a lot of what-ifs,” Nance said.

Turner said he’d thought 665 was the lake level that allowed safe passage through the roadway.

“It’s hard to tell. People just need to keep an eye on it and not do anything stupid,” Nance responded. “We’re not going to remove our barricades until it’s safe to cross. We’ve got some caution blocks up there, and it’ll at least slow them down, as John says. They’ll be there until it’s safely crossable - well, as long as nobody’s moved them.”

Nance was referring to large boulders that have been placed around the access signaling the road closure. Last year permanent signage was installed at the top of a steep hill and at the bottom of the hill just before the water crossing. The blocks have been placed in a way that allows those who want to fish or launch boats to still have access to the water. In the past, fishermen have moved or stolen signs, boulders and concrete barricades that were placed in the way, the commissioners say.

“I think it was a wise decision,” Collins said, referring to the installation of the additional painted boulders giving drivers additional warnings of the potentially dangerous water crossing.

“The way things are anymore, you could look at somebody and get sued,” Collins said.

At their meeting last week, the commissioners said at least one couple had received a $25,000 settlement from the county’s insurance company after their car was washed off the roadway when they attempted to cross at Haskins Ford during high water. The permanent signage was up at the time, warning residents that the road was closed, the commissioners said.

Recycling center could be getting another grant

Collins said they’ve submitted an application for a $30,000 grant that would help fund a year’s worth of wages for Ozark County Recycling Center employees. The application has gone through the final stages at the Southwest Central Solid Waste Management District.

“So they’ll go to the DNR [Department of Natural Resources] now to see if they approve them,” Collins said. “It’d be a big help for our county. It’d help out the general revenue [fund] quite a bit.”

Collins said the Ozark County Recycling Center is currently using a nearly $30,000 grant that’s helped offset wages for recycling center employees this year. If the new grant is approved, it would offset the next year’s wages.

“I sure wish Douglas County would get a recycling center,” Collins said. “My two guys can hardly keep up out there. They’re bringing a lot of stuff. I don’t really mind it when Douglas County people bring stuff, but they bring us stuff we can’t sell. They bring us slick paper and plastic. There ain’t no price at all for that. We have to pay a lot of times to get rid of it. We bale it up and have to pay to get it gone. But at least it’s gone that way, and not showing up out in the streams and on the highway and stuff.”

Who’s paying for the election?

Ozark County Clerk Brian Wise, who usually records the commissioners’ meeting minutes, indicated that he’d be busy with the General Municipal Election Tuesday. He said he didn’t anticipate a big turnout for the election, where voters will elect Gainesville city council members, along with Dora, Thornfield and Ava school board members.

“Do we charge the city for that?” Turner asked Wise.

“And we can recoup part of that?” Turner asked.

The Ozark County Commissioners hold their weekly meeting at 9 a.m. Mondays in the commission office in the upper level of the Ozark County Courthouse in Gainesville. The meetings are open to the public.