Back on the sidelines again 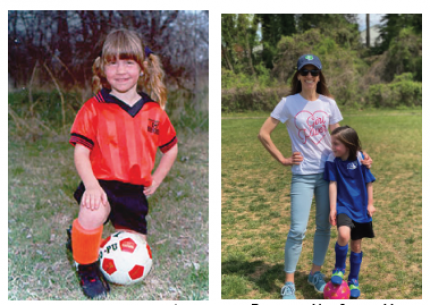 At left, Reagan Jones (Herrington), 1988 and at right, Reagan and her 6-year-old daughter, Vivian.

After a long absence, I was back in a familiar place recently, the soccer field sidelines. I was visiting my daughter and her family on a Saturday morning when her two youngest daughters, ages 4 and 6, were playing soccer in their different age groups.

I don’t know much about soccer, but I sat on soccer field sidelines during 14 years of my previous life, so it’s a place where I feel at home.

My soccer experience started in 1988 in Waco, Texas, where we’d moved for my husband Dave’s job. Our son Sam, then 6, wanted to play on his new friends’ soccer team. Whatever Sam wanted to do, his little sister Reagan, then 4, also insisted on doing.

I signed Sam up for his friends’ team then went with Reagan for the 4-year-olds organizational team meeting. When the league organizer explained that they had youngsters who wanted to play but no coach, all the parents stood around, silently looking at their shoes.

“We can’t have a team if we don’t have a coach,” the league guy said.

Reluctantly, I told the group I’d be willing to help, but I confessed that I’d never touched a soccer ball. “I know nothing about soccer,” I told them.

“No problem,” the man quickly answered as the other parents nodded encouragingly. “At this age, all you have to do is teach them to run the right direction and have fun.”

At the first practice, the other parents discovered the shocking reality that I had told the truth. Even worse, I obviously wasn’t even sure, myself, which direction the kids were supposed to run.

Finally, another mom who admitted she’d played soccer as a kid said she would help coach. We divided up the responsibilities: She taught the kids how to play soccer, and I sat on the sidelines holding the ones who cried. (Crying is inevitable when 4-year-olds play soccer.)

Sam quickly decided soccer wasn’t for him. But Reagan loved it, even though, in most games, all she did was happily run up and down the field without ever touching the ball.

She continued to play when we moved to Austin a couple of years later. By then she managed to kick the ball occasionally, and once or twice she even scored a goal, much to her surprise, and mine.

When we moved to Tampa in 1993, Reagan continued to enjoy “just for fun” recreational-league soccer. Then something unexpected happened. A competitive-team’s coach called and asked if she might want to play on that team in an upcoming tournament.

“Really?” said this mom who’d been sitting on the sidelines now for five years but still knew next to nothing about soccer. “Reagan?”

Those kinds of calls continued, and Reagan eventually joined a competitive team, playing for a gung-ho soccer coach named Jim who told Reagan – and her parents – that she had a lot of potential. If she worked hard, he said, he thought she could become a really great player.

“Really?” said this mom who still struggled to remember the right direction the team should run. “Reagan?”

But then, under Jim’s nonstop pushing and with his irresistible gift for instilling confidence, something magical happened. Reagan became a really great soccer player. During the next few years, as we traveled all over the place attending games and tournaments, even Reagan’s soccer-ignorant mom could see that she excelled at the sport.

Sometimes Dave was able to join us, playing his role as Reagan’s loudest one-man cheering and (unappreciated) coaching section. I tried to restrict him to a very tight sidelines vocabulary. He was allowed to say, “Yay!” “Go!” and “Run.” That was all. He was not allowed to say “Oh, for God’s sake!” and “What are you doing?” and “Reagan! Wake up!”

Soccer, and training for soccer, became a year-round thing, with league soccer alternating with high school soccer. Reagan, always a team captain, became a fearless competitor and often came home bruised and bloodied. Anytime she fell on the field, Dave would yell, “Get up! Get up! Get up!”

Every time she fell, Reagan always got back up.

At a high school game one night I was chatting with some other moms, not watching the action as closely as usual, when we suddenly noticed that things had gotten quiet. Then, to my astonishment, I looked around to see Dave, Mr. Get-Up-Get-Up-Get-Up, hurrying onto the field, lifting Reagan off the grass and carrying her quickly to the sidelines.

We feared she’d done permanent damage to her knee, but an orthopedic surgeon worked hard to help her heal the injury – without surgery. Reagan was intrigued with the way the doctor expertly guided her in fixing the problem, helping her get back on the field.

“I think I might want to do that,” she said one day as we drove home from the medical office. “I might want to be a doctor who knows how to fix things.”

Long story short, thanks to Coach Jim’s promotional zeal and amazing network of contacts – and Reagan’s very hard work – several colleges offered her full-ride soccer scholarships. Instead, she opted for the University of Notre Dame, which had the No. 1 team in the country at the time and offered her only a small partial scholarship (much to Dave’s chagrin). In her first year there, she played enough soccer to earn a letter. Then, in 2002, she retired from athletics.

Now, 20 years later, she’s a doctor, one who knows how to fix a lot of problems patients bring into the emergency room where she works.

She sat beside me on that recent Saturday at the soccer field. Her husband Neil paced at the end of the pitch, ready to video their daughters’ goals if they scored. My youngest granddaughter’s game was first, and I quickly called up my former coaching skills when the boo-hooing 4-year-old fled to the sidelines to have her tears wiped away.

Then came the older sister’s game, and I watched in amazement as the 6-year-old scored goal after goal, confidently dodging her opponents and streaking down the field, showing ball-handling skills to rival a World Cup contender. I still don’t know much about soccer, but watching my granddaughter play the sport her mom had excelled in, I couldn’t help but think she’s got the potential to be a really great soccer player.

Then, after the game, my opinion was confirmed when a dad from the other team came up to the 6-year-old and complimented her. “You did great out there,” he said. “You were using your right foot and your left foot. I really liked watching you play.” Then he added, only half-joking, “Now, which high school will you be going to?”

I don’t know either. But I hope I’m there on the sidelines when it happens.