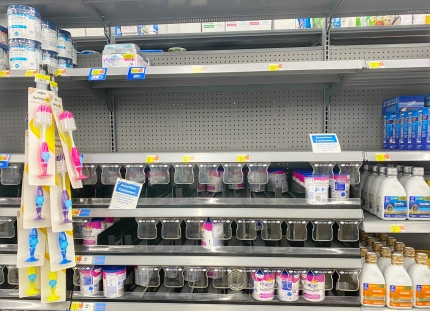 Times photo/Jessi Dreckman A baby formula shortage currently exists in the United States, and statistics show that Missouri currently has at least half of all of its formula out of stock. This photo taken over the weekend at a nearby Walmart store shows the near empty shelves that parents are often met with. The Ozark County Health Department says local mothers and fathers are often struggling to find formula at all – much less WIC approved options for low-income families. 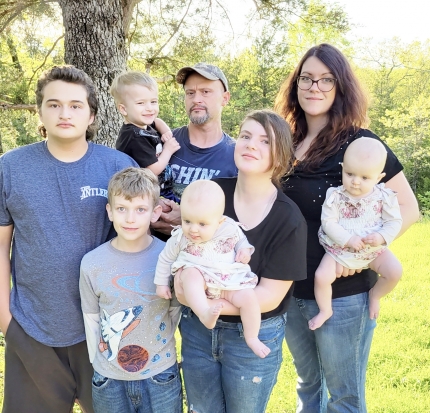 Feeding twins through the formula shortage Alyssa and William Anderson of Gainesville have been struggling through the formula shortage since their twins, Amelia and Adeline, were born last September. Above: The family is pictured here: from left: Aiden, Easton, husband William holding William Jr., Daphanie holding Amelia, Alyssa holding Adeline. Not pictured: son Colton. 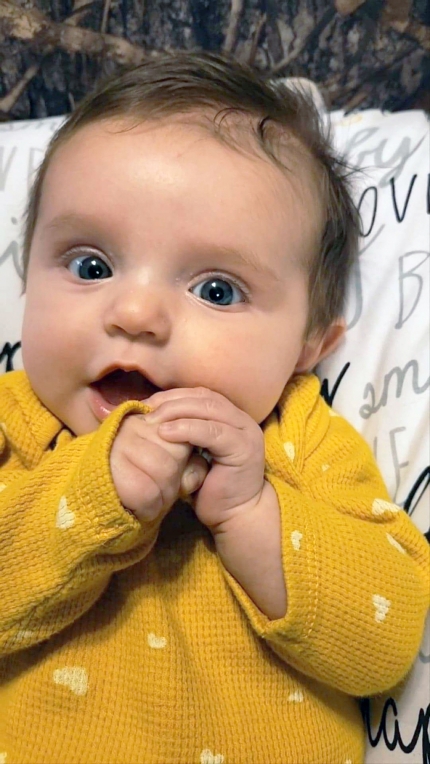 Ella Kastning Jarod and Mischa Kastning’s pediatrician diagnosed their infant daughter Ella with salmonella from the formula she was on for the first five weeks of his life.

The current baby formula shortage has left already overwhelmed new mothers and fathers with a new, very real concern – with store shelves nearly empty of formula, how can they consistently and healthfully feed their babies?

The issue is intensified in Ozark County due to its rural location and lack of store choices, said Ozark County Health Department’s WIC Clerk Suzie Green.

“This isn’t Springfield. We have one grocery store here in Gainesville, and I talk to [Town & Country Supermarket manager] Roger [Frost] constantly. It’s been on his order for months, and he gets some formula, but it’s not what the demand is for. Grocery stores across the country are having the same problem, and his grocery supplier also supplies larger areas like Springfield too. So, he can only get what they send him. And people are really getting desperate. It’s scary,” she said.

Green says Ozark County’s Women, Infants and Children’s (WIC) program, a state-funded effort that provides low-income families with baby formula and healthy foods, has just under 30 families with infants currently enrolled – and many of them are struggling to get the formula they’re signed up for through the program.

“It’s really scary. I have moms calling here saying they can’t find formula and ask what they can do. This is the type of situation where you have to use all of your resources to get what you need in some cases,” Green said.

In addition to the 30 babies enrolled in WIC, Green says she knows there are many other families who aren’t part of the program but are finding it difficult to find affordable and consistent formula options.

The shortage was drastically escalated in February when a voluntary recall was issued by formula manufacturer Abbott Laboratories for powdered Similac, Alimentum and EleCare formulas, following the death of an infant who reportedly consumed formula made at the company’s plant in Strugis, Michigan.

The shortages caused major retailers including Walmart and Walgreens to place limits on how much formula customers can purchase at one time, usually just one or two cans.

The formulas that were part of the recall were some of the mainstays of the WIC program. The program responded by issuing a waiver that allows WIC participants to choose another set of brands instead of the recalled formula.

But Green says parents are having trouble finding those options in stores also.

“We’ve addressed this as best we know how by writing to the state to see if they could change the program to just include a dollar amount to be used instead of a specific brand. As of now, that’s not the case, but we hope they’ll make a change like that soon,” she said.

Green says there’s been a small glimmer of hope that’s recently materialized. The state is now direct-shipping special baby formula to the Ozark County Health Department for babies whose doctors can write a note explaining the need for a special formula due to prematurity or other health issues. But, she says, it will only affect a small portion of babies.

Feeding twins in the shortage

Alyssa Anderson, Gainesville resident and mother of newborn twins Amelia and Adeline, said the formula crisis has been a nightmare for her family from the beginning.

“They were premature, and the doctors really wanted them to eat 2 milliliters every 30 minutes. They wouldn’t latch right away, and my milk hadn’t come in anyway. So right after birth they were bottle fed. Otherwise, they said we’d have to feed them breastmilk through a feeding tube,” Anderson said. “When my milk came in, I was pumping and everything was fine. But they weren’t growing fast enough. They were really small, and they said they needed the extra calories of the formula to grow.”

Anderson said she fed the twin infants both formula and breastmilk for a period of time until an abscess caused her to quit breastfeeding.

“It made me nervous because I had already started to hear about the formula shortage, even when I was pregnant. It wasn’t bad back then, but it was something I’d been aware of and had heard about in the news,” she said.

But it soon became a very real part of her life as she sought to find formula for the babies. Since that time, it’s been a constant stress and the twins have to switch formulas nine times due to the lack of consistent available options, Anderson said.

“I’ve been having to just buy formula outright instead of using my WIC. Last month we spent over $300 on formula between the two girls. And the constant changing has been horrible for the health and digestion. One formula in particular, I bought a can and brought it home to feed them. They couldn’t digest it and just kept vomiting. So not only did I have upset babies and had to find another formula that night, I had also just wasted $20 buying that can that I couldn’t feed them again.”

Anderson said even when she buys the formula outright, which allows her to not be restricted by specific brands, she struggles to find any affordable formula on the shelves sometimes.

Recently she couldn’t find any options at the West Plains Walmart, so she checked the store’s app and saw that it was available and in stock in Ava. She drove straight there, an hour-long trip, only to be met with more empty shelves.

“I was standing in the aisle with about four or five other moms, and we were just looking at each other like, ‘there’s no formula. What do we do?’”

She left empty handed – and with an empty gas tank from driving to try to find it.

Desperate for answers, Anderson decided to call her daughters’ pediatrician to see if there was a safe alternative to feeding formula. She was pleasantly surprised that the pediatrician’s office offered to give their family free formula samples.

“It’s something I think more families should be aware of if they can’t find any formula,” she said. “They will give it free to clients who can’t find formula or can’t afford to purchase it.”

Anderson says her babies have now transitioned to eating some solid food, which has helped eased the burden of finding so much formula. But she knows the struggle is still very real for a lot of new parents now, and the shortage is only worsening.

According to Dataembly, a website tracking the shortage, between 2 percent and 8 percent of formula was out of stock in the first half of 2021. From November 2021 and early April 2022, the out-of-stock rate jumped to 31 percent. By the end of April it was over 40 percent. Now, in Missouri more than half of all the baby formula is completely sold out. Anderson says hopes that other new mothers and fathers try to stay positive during the desperate times and find a way to make it through the struggle.

“When you tell people that it’s a struggle to find formula, sometimes they’ll say ‘you know there’s an alternative to that,’” she said, explaining that they mean breastfeeding. “It’s not helpful. I tried to breastfeed, and because of the circumstances I had to stop. Some people can’t breastfeed. We all need to be in this together.”

Gainesville resident Mischa Kastning says she’s also been dealing with the formula shortage. She’s created a cross-country network of family and friends who now buy her desired brand and type of formula when they’re able to find it in stores they visit. Some ship it to her from several states away.

Kastnings daughter Ella was born Jan. 19, about five weeks before the recall.

“Breastfeeding never really came to me, so she’s been formula fed since the beginning. She started on Similac. It was too much for her so we had to switch to sensitive,” she said.

Kastning says Ella began developing blisters and had frequent rashes that caused her and husband Jarod to be concerned.

“Come to find out all the formula that she’d been on for those five weeks were a part of the recall. She was sick, throwing up and fussy and had a slight fever here and there. That was the only thing that kept her out of the hospital. Her fever got to 100.2 but didn’t get to 100.4.”

She said even more concerning was the constant skin irritation and blisters.

“The pediatrician thought it was heat rashes. But then the rashes started making lines along her stomach, and I thought ‘this isn’t a heat rash.’” Kastning said. “They said it was a form of salmonella. She still has scars on the back of her head and neck, going down her back, all from the blisters.”

Kastning was able to keep the baby on the sensitive formula, purchasing formulas that were produced at non-recalled facilities.

“…but it’s been a struggle to find it ever since,” she said. “My mom found a can for us. I have people out of state sending me cans. We’ve found a few. Kasey [McKee] found one in Flippin, Arkansas, and Jarod’s mom found some for me in Mountain Home. Just whenever anyone can find some, I have them buy it for us,” she said. “And I’ve been helping other moms too. When I see a can of what they use at the store, I grab it and message them to ask if they need it.”

She says the situation has brought a lot of new mothers together as they all try to battle this shortage as a team and find ways to feed their babies together.

To find out more about the WIC program, contact the Ozark County Health Department by calling 417-679-3334. Green says that new or expecting mothers who wish to breastfeed instead of formula feed can also make an appointment with OCHD’s free breastfeeding counselor, Melanie DeWeese, and take advantage of the free service to help with the breastfeeding process.