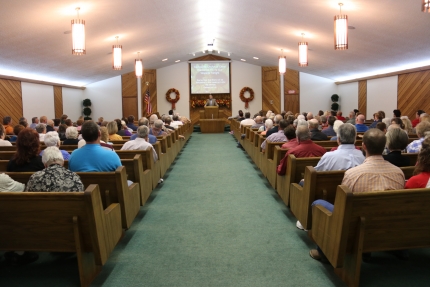 Gainesville Church of Christ minister Halbert Smith welcomes a large crowd to the church Monday night for the first of a series of worship services being held this week in area churches. The services continue Thursday-Saturday with the theme, “Unity and Maturity in Christ – Ephesians 4:1-16.” Times photo / Norene Prososki.

The 2017 Ozark County Christians Unite to Worship revival continues this week in area churches. The theme is “Unity and Maturity in Christ – Ephesians 4:1-16,” and nightly services that began Monday and Tuesday will continue at area churches Thursday through Saturday, Oct. 26-28. Many churches hold their own regular Wednesday evening services, so the series does not include a service tonight.

Gainesville Church of Christ minister Halbert Smith said the series of worship services is being held “to exalt Christ as Lord and Savior.” It’s sponsored by the Ozark County Ministerial Alliance, which Smith currently serves as president.

“Jesus prayed for all believers,” Smith said. “He prayed for the apostles and all who would believe on Him through the apostles’ message. His prayer was that  all believers may be one, just as He and the Father are one. Jesus asked that we, as believers, would be one in Him so the world might believe the Father sent Him to save the world from sin. He asked the Father that we, as believers, would be brought to complete unity. I believe the apostle Paul in Ephesians chapter 4 gives us the things we must unite on. I just want to preach Christ and Him crucified. There is too much division in the body of Christ. It will be a blessing if my efforts will help unite the believers in our county so that God receives the glory.”

Bruce DeWeese, pastor of Frontier Baptist Church, where the unity service will be held Thursday, said, “We’re all aiming for the same goal--and the only way to reach it is through Jesus Christ and accepting him as our Lord and Savior. We need to focus on that instead of what manmade doctrines have come up. They just cloud the water.

“There are those who interpret things differently – everybody’s got their different slant, and I respect the different viewpoints. But I don’t think they should drive us apart. We need to come together as the church, the body of Christ. There are some areas we can agree to disagree on. Fine. I respect that, but let’s get back to the main thing, and that’s Jesus Christ.”

Davin Friend, pastor of Salem General Baptist church, who spoke at the Monday night service at Gainesville Church of Christ, said many pastors are told they “don’t need to get into the political side of things, and that’s true in most cases. But as believers in Christ –  and that’s the main thing, that we believe in Christ – we have to stand against some of the current policies that are happening around us. We must stand together as the church. The Bible says Christians are those who believe in Christ, that He died on the cross, was buried and rose again three days later. That’s what all Christians believe. A pastor friend told me, for years Christians have been the silent majority. Now we’re the silent minority. To get past that, we have to believe in Jesus and focus on that and get past the other stuff that divides us that doesn’t matter to a hill of beans so that we can come together as the church.”

Another pastor, Jeff Dotson of Mission Square Church in Gainesville, who will speak Friday night at the service to be held at Lilly Ridge General Baptist Church east of Gainesville, said the unity revival series is “a good thing. I’m sure glad we’re doing this. We should all be looking at how we’re similar instead of different in working for the cause of Christ. Because the bottom line is this: in Christ we all come together.”

Services will be held the rest of the week according to this schedule with these sermons planned: