After more than 50 years serving in ministry, Pastor Oren Alcorn finds a home at a Theodosia church 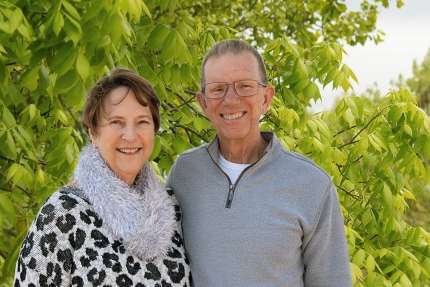 As Americans gather together with loved ones this week for the Thanksgiving holiday, many take a few moments to count their blessings. This Thursday, Oren Alcorn will be among those recognizing the things he is thankful for, including the new church family he and wife Donna have found at True Hope Church in Theodosia.

Although Oren’s service at True Hope officially began three months ago, his path in ministry started more than 50 years ago.

Typical American childhood in the Ozarks

“I was born and raised on a farm six miles south of Ava on Highway 5. It was a dairy farm, and my grandparents literally lived next door to us. So I had a lot of exposure to my grandparents and even my great grandfather,” Oren recently told the Times. “We grew up in what I think of as the typical rural American life in the Ozarks at the time, milking cows and hauling hay and picking blackberries. Doing what we needed to in order to survive.”

Oren is the son of Norman and Ruby Alcorn, the grandson of Ed and Sarah Alcorn and the great-grandson of Samuel “Newt” Newton.

“My daddy was kind of famous because he had a vegetable garden and a vegetable stand there on Highway 5, and my mom Ruby, she was a stay-at-home mom when I was young, and eventually she did work outside the home some,” he said. “My great-grandfather Newt was born in 1866, and he exposed me to a lot of stories growing up.”

He said that although many generations of his family have lived in the area, he was the first family member to start and finish his education at Ava School District. “Before that, we had the one-room schools here, but my entire education was at Ava after it consolidated,” he said.

He graduated from Ava High School in 1970.

Graduating high school, beginning a family and serving as pastor

But it was three years before his high school graduation, as a young teen, Oren’s life path began to form.

“In the fall of 1967, I announced my call to preach. Back in those days, it was something the church expected… that you would announce that God had called to preach,” he explained.

That decision - and another one he made a few months later - steered his life in the direction that now, 55 years later, has led to a life that he’s thankful for.

“In February 1968, at a church function, I asked a young lady, Donna Pueppke, to be my girlfriend. I was 15 years old at the time, and in May of that year, I asked her to marry me. For some unexplained reason she said yes,” Oren said. “I was a sophomore at the time. We’ve been married for 52 years now.”

In September of 1968, Oren was given an intermediate license to preach. As he worked to finish his high school coursework, he began to preach, going from church to church in the area, preaching as the opportunity arose.

Oren says he’d estimate that he’s preached in some way in as many as 15 different churches in the area over his career.

In 1969, Oren was licensed and ordained by Missouri Association of General Baptists. Oren and Donna were married in May 1970 just after he graduated high school.

“That’s about when my pastor at Black Oak [General Baptist Church], Lawrence Applegate, called and said that a little church on the eastern end of Douglas County needed a pastor, and he’d recommended me. It was the Little Zion General Baptist Church at Denlow, Missouri, which many people have come to just call Denlow General Baptist Church for short,” Oren said. “Donna and I went over there for an appointment, and in July 1970, they asked me to be their pastor. They only had Sunday morning services. There were about 15 people who regularly attended services there, maybe 30. It was a small, rural church, and they were very kind and very good to us. On Sunday night and Saturdays, I’d also preach at another church, Girdner.”

As Oren began his service in the churches, he and Donna also began a family.

“We lived on the very farm that I grew up on. Our home was a 12 [foot] by 44 [foot] mobile home - without air conditioning, mind you. Dad let us put it there on a little piece of the farm. We had a well drilled, and a septic tank put in. Both our daughters were born while we were living there,” Oren said.

Fifteen months after Oren and Donna were married, they welcomed their first daughter, Malissa, into the world. A few years later, they had another daughter, Micca.

“I, of course, was working secular work too at the time, meaning I was bi-vocational. I worked at Town and Country [Supermarket] for a couple years, then at a store on the Ava square until it went out of business, then I was employed at Rawlings Sporting Goods for 10 years. All the while, I was pastoring churches. Donna was working at the Extension office. When Micca was born she didn’t work outside the home for a couple years, then started working at an insurance office and then a local bank in Ava.”

Oren was the pastor at Denlow for about four years. He then went to pastor Spring Creek Church, where he served for another four years.

“Back in those days there was kind of an unspoken rule that you’d serve four years at a church and then move on,” he said.

After his service at Spring Creek, Oren returned to pastor at his childhood church, Black Oak, for seven years.

“After that time, I was contacted by a church in Jonesboro [Arkansas] and asked to relocate there and pastor their church full-time, something that we now call ‘fully funded,’ meaning that would be my vocation, my full-time job,” Oren said. “We did. We sold our home, took the girls out of school and moved to Jonesboro.”

Moving to Jonesboro - and back home

The family was in Jonesboro for about two years when the Ava General Baptist Church called Oren and told him that their pastor was sick and planned to retire. The church asked Oren if he’d consider moving back to Ava and pastoring the church full-time. Ready to return home, he gladly accepted the position.

“We moved back to a little parsonage and served the church for 32 years. All that time my wife was working, and our kids grew up. They got married, had children of their own, and life went on.”

Oren said his three decades spent at Ava General Baptist Church was a very rewarding and demanding time for him and his family.

“It is a very large church. When I first took the position, there was an average attendance of 65 or so. It started to grow shortly after that - and continued to do so for the next 20 years. Attendance grew to 200, then 250, and I think at one point it was even a little above that. There were three services every Sunday, Wednesday night youth and I led Bible Study. I was very, very busy. It consumed a lot of our time,” he said.  “On top of that, I officiated hundreds of weddings and a lot of funerals… probably more than 700 funerals.”

For 13 years of that time, Oren also served as chairman on the General Baptists Board of Directors. “It was an honor that I hold fondly. I was pleased to serve in that capacity,” he said.

In the early 2000s, Oren and Donna purchased a home in an Ava-area subdivision, where they continue to live now.

He served on the General Baptists Board of Directors until about five or six years ago, and in June 2019, after a long career with Ava General Baptist Church, he officially retired from his role as pastor of the church.

“I had some health issues develop, and felt like it was the right time, so I retired,” he said, explaining that he was diagnosed with a rare form of cancer that has affected his eyesight.

Two years after he retired, in the summer of 2021, Theodosia’s True Hope Baptist Church found itself in need of a pastor. Longtime pastor Doyle Turner, who had served as pastor at the church for three decades, was stepping down.

“He had been there for more than 30 years, like myself, and served the church very faithfully… He and Peggy moved up to Buffalo to be near his family, which left the church without a pastor,” Oren explained. “He called me one day and said, ‘Oren, can I put your name in a group of those who they can call to fill in?’ I said sure, I was available. I knew where True Hope was, and when I was very young, I had preached there once, probably for a fifth Sunday singing or something like that. And, when I served in Ava, I attended several funerals and internments in Lutie Cemetery. So I was familiar with the area.”

So, one day when the church called to ask if he’d led services that week, Oren and Donna drove to Theodosia, and he preached to the group.

“At that time they were just calling different pastors to come. They were coming each Sunday on a rotation. So, it was about once a month. Then maybe twice a month, then three times a month, and you know how that goes,” Oren said. This summer, the church had a meeting with Oren and asked if he would consider being the pastor.

“After prayerful consideration, I said yes. We’d be willing to do that,” Oren said. For the last three months, he’s served in that position officially.

The church and his service are much different than the time Oren spent at Ava General Baptist, he said.

“True Hope’s attendance is much smaller, around 30 or 35 people I’d say. And it’s a little different because we’re in Ava, and the church isn’t right there. It’s also only Sunday morning services, which is much different than a larger church,” he said.

The slower pace and more intimate service is something that he and Donna enjoy at this time in their lives.

“We’ve just found the people at True Hope to be so very kind and generous. They are very willing to support missions, and they’re response to our ministry has been great. They recently donated to Convoy of Hope in Florida to help with Ian’s devastation, and they support several ministries. I have kind of fell in love with them. They are easy to serve and easy to love. They’re just a really sweet group of people,” Oren said.

It’s that group of people that allows him, at age 70, to continue serving, following in the footsteps of many pastors before him.

“I found a calling early in life inspired by the iconic preachers of this area, people like Tom Johnson, Tommy Hobbs, Lawrence Applegate, H.E. Rippee, Elmer Wray and Marvin Wray,” he said. “All of those guys have been very important people in my life.”

And with his more than 50 years of service, there’s no doubt that Oren himself has inspired others to answer God’s call of serving in ministry in these beloved Ozark hills - continuing a tradition that began many generations before.