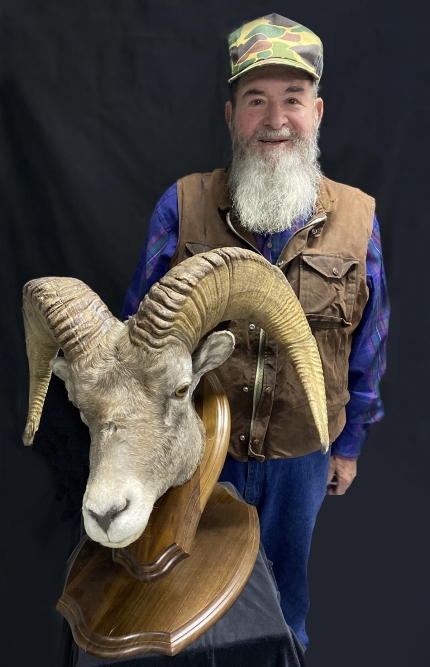 Alfred Newton, 75, killed this bighorn ram last year in Wyoming, drawing a hunting license for it after applying for a tag for 20 years. He had the ram mounted on a pedestal so it could be moved around, and the completed mount finally arrived last month.

For 20 years, Gainesville resident Alfred Newton applied for a permit to hunt bighorn sheep in Wyoming and never drew a tag. Finally, last year, his 21st year of applying, “I had enough preference points built up that I was a sure draw,” Newton, now 75 and retired from his family’s water-well drilling and servicing company, said recently, adding with a laugh, “I started when I was too young and waited until I was too old.”

Newton comes from a long line of hunters, including his Newton grandparents and other relatives. He remembers his dad, Virgil Newton, carrying him on his back as they headed into the deer woods together, Alfred’s feet in Virgil’s hip pockets. Alfred killed his first deer when he was 7.

The bighorn ram hunt wasn’t Newton’s first time hunting out west. He has done other hunts in Colorado, Kansas, Nebraska, Arizona and Montana and he killed a brown bear in Alaska in the mid-1980s. He has also hunted in Arkansas, Kentucky and Tennessee. And he has hunted in Wyoming several times. “I had relatives who have a ranch out there. I’ve done elk hunts before, and I killed a moose 10 or 15 years ago. But I always thought, ‘Boy, I’d like to kill one of those bighorn sheep.’ I didn’t realize it would take as long as it did to get the permit,” he said.

He applied for a bighorn permit for several years, paying the application fee year after year without success. He kept trying, he said, because “after a few years of putting in and not drawing, I thought, ‘Well, I’m not going to quit now.’ So I kept going. There may have been a year or two when I didn’t put in, but finally it worked out.”

He hunted in a designated wilderness area of Shoshone National Forest in northern Wyoming, where nonresidents may hunt only with a licensed guide. Through the years, he had put in for permits in various hunting-area “units” without any luck. Then, in 2019, he talked by phone with Jimmy Owens, who owns Lost Creek Outfitters, a guide service near Cody, Wyoming, before he put in for the permit. “He suggested I put in for Area 2. I did, and the first year I didn’t draw. But the next time, I did draw,” he said.

So, in September 2020, Newton headed west in his RV for the 10-day hunt. He flew his son-in-law, James Ford, from Springfield to Cody to join him on the adventure.

The permit’s bag limit was any ram, and the guide service asked “if I wanted to trophy hunt or what,” Newton said. “I said yes, I was trophy hunting.”

He and Ford set out with the guide, Cameron Schmidt. They set up a spike camp near timberline, a 3 1/2-hour horse- and muleback ride from the trailhead. Pack mules carried their gear, which consisted of small tents for Newton and Ford (Schmidt, the guide, slept out in the open, Newton said), dehydrated food, water and a little propane burner about the size of a 2-liter bottle for heating water. In addition to the water they carried in, they got water from a spring a short distance from their camp, Newton said. “The horses drank out of it, and we did too,” he said.

Strict regulations limit what can be brought into the wilderness area. “Basically, it’s nothing with a motor or wheels, no chainsaws, nothing like that,” he said.

“From the spike camp, we would go another three-hour ride to where we were hunting. We would ride horses as far as the horses could go and then we went places the horses couldn’t get to,” Newton said. “The guide had an altimeter. We hunted as high as 12,400 feet.”

Most days, they hunted until dusk, “and then the guide would lead us back down to the camp in the dark,” Newton said.

It was daunting, mountainous terrain with “rough, rolly rocks above timberline,” Newton said. Looking back on it, he said, “I decided I’m either stupid or tough.”

One morning, they saw a grizzly bear with cubs. And they saw a lot of sheep, including several “banana horns,” Newton said. “But we were trophy hunting, so we had to wait to pick out a good ram.”

Newton’s permit allowed him to hunt for 10 days. After four days, his son-in-law had to fly back home. Newton and the guide accompanied him back to the base camp. Then they returned to the spike camp, and Newton kept hunting.

They saw a trophy ram one day that Newton probably could have killed, “but the guide said, ‘If you want to hire a helicopter or you want to have a repeller go down there and get it, then shoot.’ I said, ‘No, I can’t afford a $1,000-an-hour helicopter.’ So we let that one go,” he said.

He hunted with a .270 Winchester featherweight rifle. “I have different guns, but I took that one because it’s the lightest, most efficient thing I had.”

They were at about 11,000 feet altitude, and the terrain was so rough, “it took us two hours to get to him from where I shot,” Newton said. “And when we got there, I didn’t think I could get down to him. So the guide went down and hauled him back up.”

The guide quartered the sheep, estimated at 200-250 pounds, and carried it back up to where Newton was waiting. “He was tough,” Newton said. “He could just do it.”

They packed the meat and their spike camp things onto the mules and headed back down the mountain.

Newton didn’t have the horns scored, so he doesn’t have an official way to compare his ram with others. “They figured he was about 8 years old. He’s good, but there are bigger sheep out there,” he said. On the 10th day of a 10-day hunt, he wasn’t going to be picky.

He brought the meat home. “I can’t say it tastes like chicken, but it’s delicious,” he joked.

Last month, he finally received the pedestal mount of the ram that was completed by a Wyoming taxidermist. “They shipped it in a big ol’ box,” Newton said, “and it got here unharmed.”

Last week he was out in the woods for another Ozark County deer season. And next? “I do have more preference points on moose,” he said. “I might put in again next year.”