Lutie class of 2021 graduate in May 22 commencement 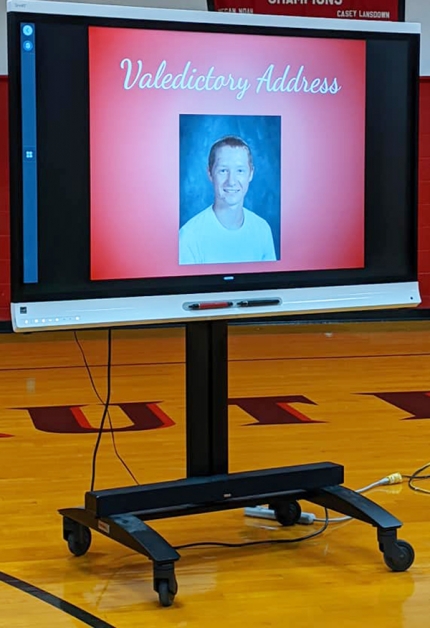 Trevor Mansker was named 2021 Lutie salutatorian. Mansker finished his education in March and left soon after for recruit training in the United States Navy. His foster mother and Lutie teacher Kathalee Cole, pictured below, gave his speech to the graduation audience. 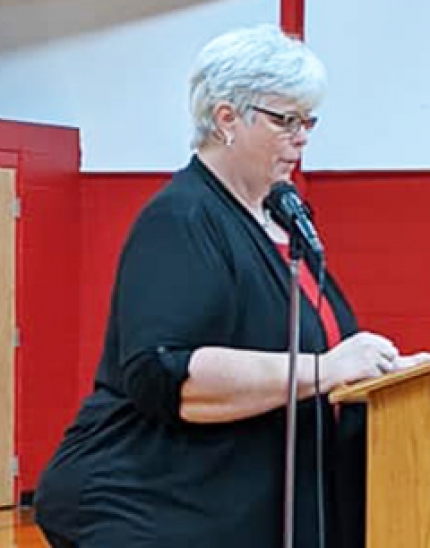 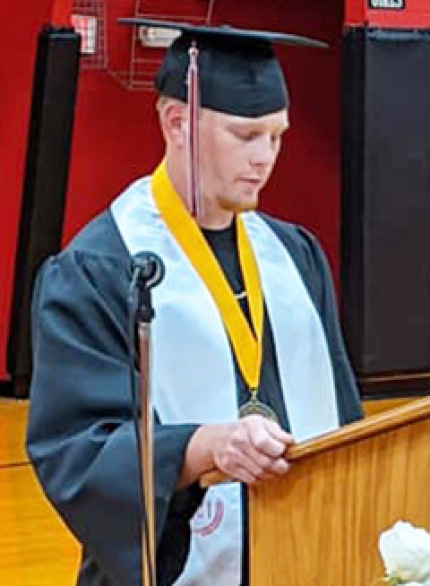 Arthaud told the graduates that when a person gets knocked down, the best thing to do is “get up, dust yourself off and try again.”

He also told them that “all roads lead back home.”

Arthaud was instrumental in helping promote the passing of a tax levy in 1990 that transitioned Lutie’s kindergarten through eighth grade district to include a full high school. The K-12 school was established and completed its first year in 1990-91, making this year’s the 30th high schoolgraduating class.

Degan Chambers, son of Daniel and Jeanne Chambers of Theodosia, was this year’s salutatorian. Chambers transitioned to finish his education online through Lutie this school year and began a career with R&K Underground, laying natural gas pipeline, about seven months ago. He was recently engaged to Skylar Homer. The couple will be married June 5.

Chambers opened his speech by remembering his rocky introduction to Lutie School.

“I want to start by thanking all the school faculty and teachers that have helped me along the way. I’ve made a lot of friends over the years,” he said. “When I moved here from California, I didn’t think much of this little school, but… I realized that you don’t make friends here, you make family.”

Chambers said those who drive by Lutie probably don’t think much of the little school, but if they could spend a week within its walls, they’d “realize how much students and teachers care about each other.”

Chambers thanked his parents, beginning with his dad, Daniel Chambers, who “taught me how to be a hard-working man and always have respect for women and did anything he could to be a helping hand.”

Next he thanked his mother, Jeanne, who, “taught me respect and how to be the best man I could be and all that leads me to be a hard-working man and never settle for just getting by and strive for better.”

Chambers addressed his own hard work this year.

“This year was kinda rough having to work 10-hour days busting my butt [at my job] and then having to go back to the hotel room and do my schoolwork, only to go out and do it all again, but I will say Skylar makes a pretty good math teacher,” Chambers said, referring to the help he received from his fiancée. “I did it, and that led me to realize that I can do anything I put my mind to.”

This year’s valedictorian, Trevor Mansker, was unable to attend the ceremony. He finished his high school education this March and left soon after for boot camp in the Navy. Mansker is the son of Jason Mansker and Autumn Ridley and the foster son of Kathalee Cole.

Cole, who will soon take her role as the Lutie principal on July 1, read Mansker’s speech to the graduation crowd.

“Well, guys, we made it! Take a big deep breath, parents. You have helped us achieve another major milestone in life – graduation. Even though I’ve already started my next adventure in life as a future sailor, it is a great honor to be named valedictorian of the class of 2021,” Masnker wrote in the speech.

He congratulated his fellow graduates and thanked the faculty and staff at Lutie for their hard work and dedication to seeing each student succeed.

He then turned his gratitude to the parents in the audience.

“We love you. You have always been there for us no matter the problem, big or small. You have pushed us to succeed in life no matter what we do. You were our cheerleader, our chauffeur, our coach – and most importantly our ATM,” he said, laughing. “None of what we have accomplished or achieved would have been possible without you.”

Mansker challenged his fellow graduates to strive for success and “dare to dream the impossible dream.”

He finished his speech with this final thought:

“Your success is measured by the strength of your desire, the size of your dream and how you handle disappointment along the way. Dream big, class of 2021. Hold strong to your desire for success and when you fall, stand up, brush yourself off and try again. Thank you for all the memories we made, and I can’t wait to see what the future holds for each of us.”