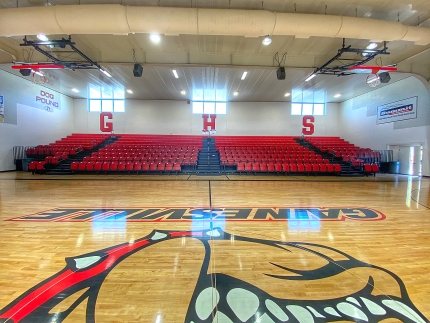 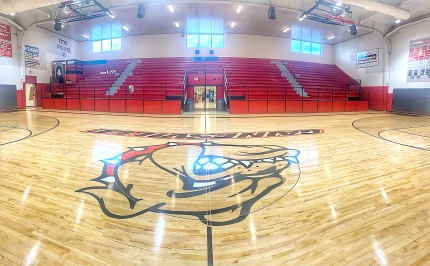 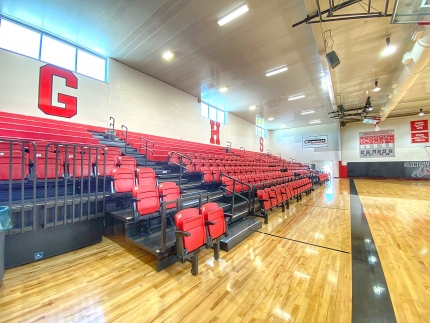 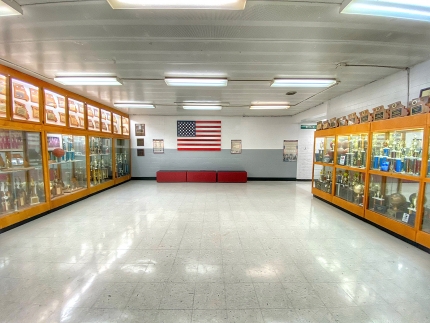 Two weeks ago, 200 stadium-style, fixed-back seats were installed in the Gainesville High School gym, wrapping up the completion of the gym’s renovation that began earlier this summer. The stadium-style seats, paired with new traditional bench-style bleachers above them, provide seating for a total of 532 people.

The new bleachers are ADA-compliant, unlike the old, fixed bleachers that could not be accessed without climbing stairs. And the new bleachers can be retracted to a 6-foot-wide footprint against the gym wall, opening up 2,300 square feet of new gym flooring that has been built over the basement-level space that originally housed the old locker rooms. That space has now been filled in, and the old locker rooms no longer exist.

“We are very excited about the bleacher renovation,” superintendent Justin Gilmore told the Times. “Our hope is that anyone can come watch a game if they wish.“

The original west-side door into the gym that opened from a main school corridor near the school entrance has been closed in, and a new door has been created in the gym’s north wall. That entrance will connect to the school’s new, nearly 8,000-square-foot addition  when it is completed. Until then, the gym can be accessed through two other doorways, one connected to the corridor near the junior high wing and another in the hallway near the school’s art room.

The school’s main front entrance has been temporarily moved to the junior high entrance on the east end of the building during the construction phase. The security system was expanded to create space for a secretary to see and admit those asking to enter the building’s locked junior high doors during the school day.

The school’s bus-loading area also moved to the east end of the building.

Local contractors are among those who worked on the project, Gilmore said. Winrod Brothers Construction did the bleacher demolition and door-opening work, MLH & Sons provided and prepped the gravel, Uchtman Hand-Crafted Stone helped with some of the block work and Robby Strain Concrete did the concrete work. Dojan, Inc., from Sparta completed the new flooring; the new bleachers were shipped from Heartland Seating of Shawnee, Kansas.