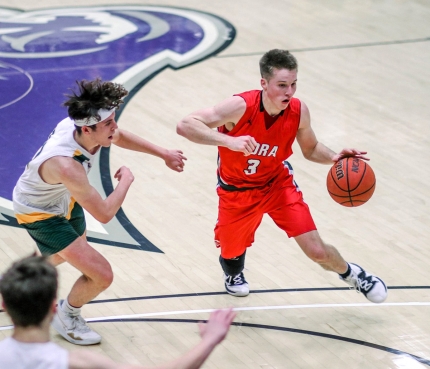 Dora junior Isaac Haney drives around a defender during Saturday’s 86-58 victory over Lakeland (14-1) at Southwest Baptist University in Bolivar. Haney, who topped a career 2,000 points on Jan. 7 when the Falcons defeated Alton, led the scoring with 42 points. Photo by Karla Smith

This story is reprinted with permission from the Springfield News-Leader.

Isaac Haney describes himself as a present person.

He doesn’t look much past his nose or his next workout. When people asked him over the summer if he had a dream school, he told them it didn’t matter.

All he wanted to do was play basketball.

But once Missouri State offered him in mid-December after he dropped 32 points against one of the best teams in Oklahoma, he started to realize where he wanted to continue his basketball career.

“I fell in love with Missouri State,” Haney said. “It felt like a dream school for me.”

Haney became the first player in the Class of 2021 to give MSU head coach Dana Ford a verbal commitment this past week. He made his official announcement in a tweet on Jan. 23.

The Dora junior is one of the best scorers in Missouri. He called to talk to the News-Leader  Tuesday night about his decision, right after he dropped more than 30 points in a 93-40 win over Mountain Grove.

Haney said his decision eventually became easy after he formed a relationship with Ford and tried to picture himself anywhere else.

He initially told the News-Leader in an interview in mid-December how he wanted to take his time and have a good summer of AAU ball before making a decision. Just over a month later, he decided he wants to be a Bear.

“I took a step back and asked myself, in the future where did I want to be and what I felt most comfortable with,” Haney said. “It was like, ‘Man, if someone else comes knocking, do you really want to be anywhere else?’ It felt like home. I felt like it was the right thing to do at the time.”

The 6-foot-2 guard also held offers from Texas State and Grambling State. Following his big performance in December, he heard from Oral Robert University, Southern Illinois University and from other teams around the Missouri Valley Conference.

No one else was able to form a relationship with Haney in the way Ford was.

Ford was able to relate to Haney. Both are from small towns and are just trying to make it...

“He always is talking like a friend,” Haney said of Ford. “He’s gotta do his job as a coach, but I always feel like we’ll have that friendship relationship as well.

“I feel like he’s a winner and is competitive, and I want to surround myself with other people who are competitive and want to win. Every time we talk it’s just about, ‘Oh, we can’t wait to win,’ and I want to be about winning.”

Committing to Missouri State will also mean shorter drives to the gym if Haney was looking to get a workout in.

Twice a week, Haney drives two hours to north Nixa and two hours back to Dora just to work out with Robert Yanders — Haney’s AAU coach and the owner of The Basketball Movement gym.

Haney is a member of Yanders Law AAU along with the likes of Kickapoo star Anton Brookshire — Yanders’ nephew.

“I love him because he’s a good person,” Yanders said of Haney. “He’s just a standout kid. He’s loyal and committed to the cause. He’ll go down as one of the best players I’ve ever coached, and I love him.”

Yanders, a former Missouri State standout, said Haney had multiple opportunities to go to different AAU programs, but his loyalty helped put Yanders Law on the map. Yanders Law recently earned a deal with Under Armour and is continuing to grow.

“At the end of the day, the kid will run through a brick wall for you,” Yander said. “He’s going to do whatever it takes to win. I think he’s tenacious and is a force to be reckoned with. Every night, you’re going to know what you’re going to get from Isaac Haney. Even on the road, I know I’m always going to have a chance to win with Isaac Haney.”

Missouri State currently has five open scholarships for the 2021-22 season following Haney’s commitment and the reported commitment of A.J. James.

Until then, Haney has his eyes set on winning a state championship at Dora. He doesn’t feel like he’s accomplished anything yet in high school because he can’t call himself a state champ.

Haney said he’s going to have to go out and prove every night why he’s a player worthy of playing at Missouri State. He said he needs to play at the highest level and make sure he’s not slacking off once it’s finally time to put on the maroon and white.

As he reflects on what it took for him to get to where he is now — all those long drives from Dora to Nixa just for a 45-minute workout twice a week — he said it was all worth it in the end.

He recently sat down with his dad and looked at a few photos, and they reflected on the journey to get to where he is today. His dad gave him a piece of advice.

“He said, ‘It’s been a long journey. Make sure you enjoy it and continue to work so you don’t get cheated out of everything that you worked for.’”