Bakersfield School will go to four-day week next year 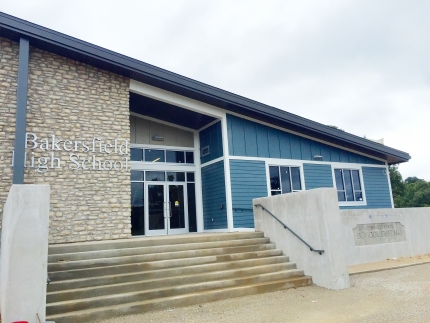 The Bakersfield school board voted last week to shift the school to a four-day week beginning with the 2018-2019 school year, which starts Aug. 14. Superintendent Amy Britt said the district estimates that the change may save as much as $70,000 in operating costs.

The Bakersfield school board voted Thursday, March 15, to shift the school district to a four-day week beginning with the 2018-2019 school year. The school week will be Tuesday-Friday beginning with the new school year, which is set to start Aug. 14. Superintendent Amy Britt said Monday the school day will be from 7:50 a.m. to 3:40 p.m.
Bakersfield sent two surveys to parents recently asking for feedback about the proposal. The first, sent home with students, generated a 73 percent response in favor of the four-day week. A second survey, mailed to every household with students in the school district, generated a response of 84 percent in favor for the four-day week and 16 percent voting against it. The majority of those responding to the survey chose Monday as the desired day off.
In an earlier interview with the Times discussing the survey that had been sent home to parents to outline the pros and cons of a four-day week and asking for feedback, Britt said the four-day school week is a growing trend among some area schools. (See “Bakersfield School is surveying parents about possible shift to four-day week,” Times, Jan. 31.)

First local school to adopt four-day week
Bakersfield is the first Ozark County school to officially adopt the four-day school week. Steve Richards, superintendent at Dora, said his district doesn’t have a four-day schedule but it has modified its schedule so that it has a longer school day, from 7:50 a.m. to 3:26 p.m., and fewer days in the school year (154 days next year with no half days, he said, compared to the traditional school year calendar of 166-174 days). Several four-day weekends are built into the Dora school year, he said.
Gainesville superintendent Jeffrey Hyatt said the four-day school week will be up for discussion at the next board meeting, to be held at 6 p.m. Monday, March 26, but he also noted that the board could choose to table the idea for now. He said he does not anticipate making the move to a four-day week “or seriously considering it” until the 2019-2020 year.
Lutie superintendent Scot Young said Lutie has no plans at this time to consider a four-day week. Thornfield superintendent Mike Wallace said Monday that the district had considered going to a four-day week several years ago but had decided against it. The board was to meet Monday night in regular session, and he said the topic would be presented again to see if the current board might want to look into making the change. Results of that discussion were not available at press time Tuesday.

Reduced costs, greater flexibility
Britt said in January that going to a four-day school week would reduce the cost of bus fuel by 20 percent and would most likely reduce the school’s utility bill and other costs as well. Monday she estimated that, by going to a four-day week, the district may save as much as $70,000 in operating costs. That savings could be used to add staff, update the bus fleet on a quicker rotation and pay down the bond on the new high school building, which opened last year, Britt said. The district also hopes the new schedule would help the school “improve many areas of learning,” she said.
But she said that one of the most compelling arguments for the four-day week relates to teacher recruitment and retention. “We can’t pay like the big schools do,” she said. “But we’re seeing that, in schools with a four-day week, they’re not losing staff like other small schools are.”
The four-day week is appealing to some teachers because the extra day allows for greater flexibility in scheduling professional development and collaborative time, Britt said, “and it’s easier to facilitate that when you have an extra day in the week.” Also, she said, “we’re seeing a younger generation of teachers coming out who hold family time as something that’s important to them. A four-day work gives them more time with their own family, and that’s appealing to them.”
A four-day week would also give staff members more flexibility in scheduling their own personal commitments, such as medical appointments for themselves or their children on the “fifth day” of the week. In other areas, that change has resulted in better staff attendance, Britt said, with fewer days of teachers requesting leave and having substitute teachers in the classroom.
Even though students will be attending classes only four days a week, the central office staff will continue to work five days a week, Britt said. Work hours for non-teaching staff will be adjusted so that their total pay will remain unchanged, she said. Custodial staff will work still work a 40-hour week, as will the cafeteria staff, working four 10-hour days, which will let the school continue its popular supper program.  “The cooks will just do things as a part of their longer day that we previously paid extra for, saving labor costs,” she said.
Bakersfield juniors and seniors who attend vo-tech classes at the career center in West Plains will still attend those classes five days a week,  and Bakersfield bus drivers will rotate driving to the vo tech classes, she said. “That was something we had paid extra for” in the past.
The school’s backpack program, which sends nonperishable food home with students for the weekend, will be increased to provide additional food to compensate for the three-day weekend, Britt said, adding that food for the program is donated by the Ozark County food bank.
The four-day week will also give high school students more time to work part-time jobs, she said. Studies have shown that student attendance is better in districts with a four-day week, “and anytime you have improved student attendance, that’s awesome.”
In the January interview, Britt said Bakersfield and other area high schools routinely visit nearby rural elementary schools such as Fairview and Richards, where the students can choose which high school they want to attend. “We tell them about our school and then ask how many might be interested, and hands go up. But when we mention that we’re considering a four-day week and then ask how many would be interested, lots of hands go up,” she said.

Childcare challenge
Britt said school officials and board members are aware that one of the biggest drawbacks to the four-day week is the challenge working parents will have in finding day care for that fifth weekday when there’s no school, adding that research shows that’s a concern for about one-third of the elementary population.
“However, some studies show that the same demographic that’s available to babysit during summer, such as grandparents and high school kids, is still available to babysit one day a week,” she said.
The school will compile a list of area daycare providers that parents may request, although they should understand that the caregivers on the list will not be recommended or verified by the school. It’s simply a list of names that parents can use to do their own research in finding a qualified and acceptable caregiver.
The 2018-19 school calendar has been set and was posted on the Bakersfield School Alumni Facebook page. The last day of the 2018-19 school year will be May 17, 2019.
Britt will host her usual monthly community coffee from 4 to 6 p.m. Monday, April 2, in her office. Anyone with questions is encouraged to attend.