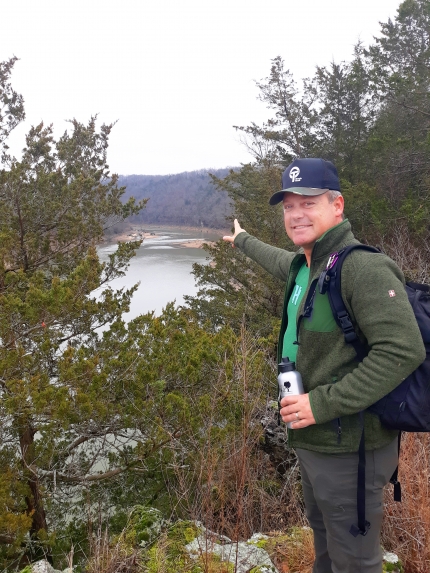 On a recent cold, wintry day, James Hodges and his trusty trail dog Cooper picked through the woods along Norfork Lake at Tecumseh, heading for a bluff that overlooks what locals call “the forks,” a scenic spot where the calm waters of Bryant Creek meet the spring-fed North Fork of the White River just above the lake.

Every so often along the way, he placed a piece of pink flagging tape on a branch or tree trunk, blazing the proposed route of a new hiking trail.

Hodges says the path through Ozark County will eventually serve as a keystone piece of trail connecting Missouri’s Ozark Trail to the Ozark Highlands Trail in Arkansas, creating a 700-mile trail, dubbed the Trans-Ozark Trail, reaching all the way from St. Louis to Lake Fort Smith, Arkansas.

The Times confirmed Tuesday that the Corps of Engineers is working through the approval process  for construction of the trail on Corps land from Norfork Dam in Arkansas to Dawt.

“It’s being approved in stages, and some stages have received approval. We’re still waiting on other stages to be approved, but we’re getting really close,” Mountain Home, Arkansas, Corps of  Engineer project manager Mark Case told the Times. “We’re pushing hard and working with local groups to make it happen, and if everything goes right, it’ll be soon. I’d love to see the final approval on the project within the next 30 days or so, hopefully.”

Giving back to a country that was ‘good to us’

Hodges grew up near Bakersfield and attended high school in Viola, Arkansas.

After retiring from the Air Force, he started Hodges Consulting, a small engineering firm in Mountain Home, Arkansas, and set his sights on giving back to the community.

“Uncle Sam was good to us – me and my family – [and provided me] with a nice retirement,” he said.

Now Hodges shares his love of the outdoors, as well as his engineering skills and military experience, by volunteering with David’s Trail, a nonprofit organization in Mountain Home that has built a 17-mile trail along the banks of Norfork Lake stretching from Robinson Point Park to Red Bank Recreation Area near Gamaliel, Arkansas.

The next phase of the David’s Trail project is to continue that trail north for 15 miles to Tecumseh, then on to the Dawt area in Ozark  County, where the Corps of Engineers land ends.

With the exception of a few road crossings, all of the extended trail will be located on Corps land along the east bank of Norfork Lake.

When Hodges is laying routes for trails, he says he generally follows existing game trails made by animals, but he sometimes makes a detour to bring hikers past an interesting natural feature. He says he must also take care to keep the trail above 580 feet of elevation, where it will be safe from high lake levels.

Back in the 1970s, outdoor enthusiasts in both Missouri and Arkansas dreamed of building hiking trails that spanned their respective states. Their dreams, fueled by the sweat and hard work of dedicated volunteers, eventually became a reality, and the Ozark Highlands Trail in Arkansas and the Ozark Trail in Missouri were born.

From the beginning, hikers planned that the two trails would eventually be connected to form a 700-mile Trans-Ozark Trail.

While the trail wouldn’t be as extensive as the Appalachian Trail on the East Coast or Pacific Crest Trail on the West Coast, each of which spans well over 2,000 miles, it would be one of the longest continuous hikes in the Midwest and a prized attraction for hikers around the country.

Now that hundreds of miles of each trail have been built, volunteers like Hodges are setting their sights on what comes next, a “golden spike opportunity” to join the two trails.

The Ozark Highlands Trail currently stretches 269 miles across the state of Arkansas, running from Lake Fort Smith State Park south of Fayetteville, through the Ozark National Forest, along the Buffalo River, and all the way to Norfork Lake.

The trail is mostly contiguous, lacking only 49 “gap miles” scattered among sections before the 318-mile trail is complete. The stretch of trail the David’s Trail organization is currently building will make up the northern end of the Ozark Highlands Trail, ending at the Missouri/Arkansas border.

One completed portion of the Ozark Trail, the North Fork section, passes through Mark Twain National Forest in the northeast corner of Ozark County. This section consists of 26 miles of trail stretching from the Collins Ridge trailhead (just inside the Ozark County line off County Road 362) via KK Highway to the Pomona trailhead off P Highway in Howell County.

The trail crosses CC Highway just east of the Ozark / Howell County line, where it can be accessed at the McGarr Ridge trailhead to the south or the CC trailhead to the north. This area is especially popular with equestrian trail riders, and a portion of the trail is also open to mountain bikers.

Several other trails loop off of the main route, including the Ridgerunner Trail, a National Recreation Trail that runs from the North Fork Recreation Area (locally known as Hammond access on the North Fork of the White River) east of Dora to Noblett Lake in Douglas County.

According to Mark Seesing, Ozark Trail Association (OTA) board member and chairman for the planning and development, the OTA will be considering road routes to serve as “temporary trail until off-road routes can be established.” The road routes would probably go between the new trailhead to be established at Dawt and the existing Collins Ridge trailhead on the North Fork section of the Ozark Trail and from the northeastern end of that trail to the Eleven Point Section in Oregon County.

While many exciting plans are underway, it will still be a little while before volunteer trail builders can get their hands dirty.

David’s Trail received approval of the cultural and archaeological survey in late January, one of the last requirements before the Corps of Engineers could sign off on the proposed project. Last week, Hodges said the Corps issued many of its approvals for trail construction “from the [Norfork] dam [where David’s Trail is working to fill in Ozarks Highlands Trail gaps] to Dawt.” One the final approval is issued by the Corps, likely within the next month or so, construction can begin.

The Corps had already given Hodges the go-ahead to blaze the trail and trim back limbs, and now the Ozark Trail Association will review his route and work to secure trail-building funds from Missouri’s Recreational Trail Program.

“The OTA is very excited about partnering with David’s Trail and the [Ozark Highlands Trail Association] to get the [Trans-Ozark Trail] connection built and ready for use,” said Seesing. “Hopefully we can get that ready for a March submission for a January 2021 award date.”

According to Hodges, each mile of trail costs approximately $12,000 to construct. That estimate includes volunteer contributions as well as the cost of hiring equipment.

“Where the terrain is difficult, rocky and steep, it could cost more than that, but trail in those areas would most likely be built by volunteers familiar with building trail in such conditions,” he said.

Hodges said the group is working on setting dates for the initial trail building and expects that at least two work days will be scheduled this spring, with bigger trail-building crews coming in next winter.

How to get involved

There are many ways local residents can get involved, said Hodges, including voicing public support for the project, volunteering with OTA and donating to the David’s Trail Foundation to help fund trail construction and matching grant funds.

“Private landowners, such as those near Dawt and the North Fork section of the Ozark Trail near Dora, can work with the Ozark Trail Association to develop agreements or easements so the trail can cross their land,” he said.