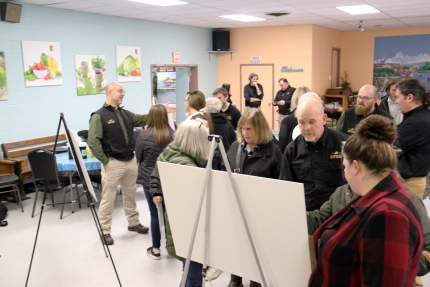 Thirty-four people attended an open-house-style public meeting last week in Ava, where representatives of Missouri State Parks presented development options for Bryant Creek State Park. The proposed plans for the park, in Douglas County off N Highway a few miles north of Rockbridge, were based on public input, the park’s mission and the resources the land has to offer, organizers said.

The state bought the land for Bryant Creek State Park in late 2016 with money set aside from a legal settlement to compensate for groundwater pollution. The park has remained closed since then as Missouri State Parks works through what it calls its “conceptual development process” for new parks. (See “Officials seek partners for possible opening of Bryant Creek State Park” in the June 19, 2019, edition of the Times.)

Several options for park developments were presented, including two primitive camping locations, hiking and multi-use trails, and three possible locations for day-use areas. State park staff members were on hand to answer questions about the proposed developments, and those attending were invited to complete a survey stating which (if any) options they supported. In addition to residents of Douglas and Ozark counties, the crowd included members of the White River Group of the Sierra Club, and State Rep. Karla Eslinger, who has been a strong supporter of the park.

The 2,917-acre park is divided by N Highway. The southern portion consists of a logged oak-pine forest while the northern portion features mature hardwood forest bordering Bryant Creek. Douglas County Road 337-D runs through the northwest portion of the park, leading to a house and barn surrounded by pasture. This open area provides the most opportunity for development and is one proposed location for a day-use area, a primitive camping area and a trailhead.

A second proposed camping area is adjacent to the pasture in a semi-open pine grove, but it would offer fewer sites. Two other day-use areas with trailheads have been proposed, one in the center of the park along County Road 337, and one in the southern portion. Multi-use trails, open to non-motorized traffic including hiking, mountain biking and horse riding, are proposed for the portion of the park south of N Highway. Hiking-only trails are proposed for the more ecologically sensitive “preservation area” that falls north of N Highway.

State park staff members were reluctant to provide a specific timeline for the process, but it’s believed the process could take several months to complete. After the plan is finalized, the actual development of the park will depend on resources and funding availability and could take years to begin.

To view maps of the proposed developments and to submit comments visit:

The public comment period will be open until Saturday, Feb. 15.