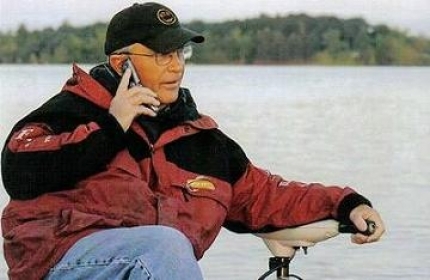 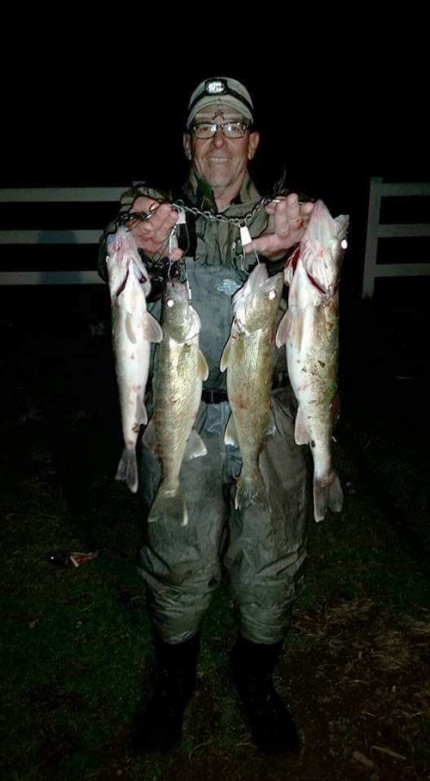 Walleye catch Tecumseh resident Bill Driscoll caught this nice stringer of walleye on the evening of Wednesday, March 4, near the Tecumseh bridge.

I fished for stripers at the beginning of last week in Bennett’s Bayou. The warm weather, full moon and the lake draw-down changed the shad bait pattern. Most of the bait was on the flat by Fout’s and the big flat before the Walker’s arm of the bayou. The warm, strong winds early in the week moved the shad up the creek arms and they were very thick in both arms of Bennett’s.

I caught fish on the flat by Fout’s and on the big flat, but it was slow since the big bait balls were not there. I moved up to the right arm and found bait 20 feet thick the length of the right arm, but by then it was late in the morning, and I only had one strike.

My son was on the left arm and was looking for bait. The water temperature way up the arm was 64 degrees. He found lots of bait and crappie. The crappie had moved up into 2 feet of water, feeding on small shad. The anglers who figured that out were catching them very fast.

The patterns all changed with the cold rain and temperature drop Saturday [March 14]. Sunday morning the highest water temperature was 50 temperature, and the creeks were 49 degrees. The upper creek arms dropped 8 degrees. The bait moved out to the flat to find their comfort zone.

Sean and I had a two-boat trip, and we started off with a bang. We each had a little boy and the parents and grandparents, and we split the party up. Each boy caught a 12-pound striper and numerous small stripers. The fish were caught on the big flat before Walker’s arm in 40-plus feet of water. We were using small gizzard shad and shiners on long and down lines.

With all the rain and cold weather last week, I expect the window to catch stripers is very early and then late afternoon. Until we can get some sunshine and warm south winds, the all-day bite we normally have will not happen.

Keep fishing the creeks for crappie, find a brush pile with their tops at 15 feet or deeper, and you will find crappie. Minnows, jigs and small spoons are catching limits of crappie. The best three creeks right now are Big Creek, Bennett’s Bayou and Pigeon Creek.