Injured bald eagle found in Ozark County, rehabilitated and released back into wild 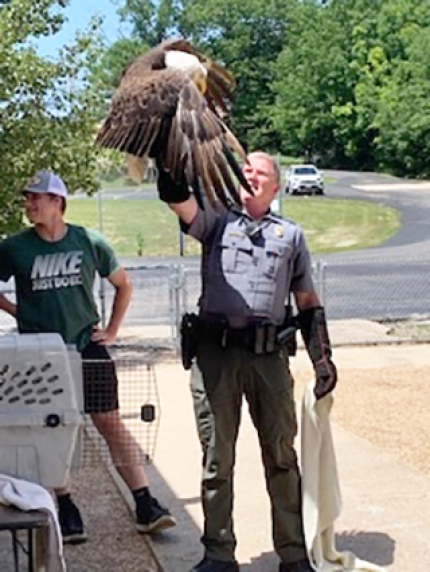 On May 24, I received a call about an injured bald eagle here in Ozark County.

I went to the area where the caller told me the eagle was and found it lying on the ground just inside the fence in a cow pasture. As I started getting everything ready to capture, contain and transport the eagle, it started pouring rain. I had to move quickly to retrieve the eagle, who did not want to be caught and kept hopping away and trying unsuccessfully to fly. I finally caught it and caged it for transport to the raptor rehab at the Dickerson Park Zoo in Springfield.

I was in Springfield on June 14, patrolling the Springfield Conservation Nature Center when I received a call from the raptor rehab telling me that my eagle was ready for release.

When I finished my patrol at the Nature Center, I went to the zoo and loaded up the eagle to return it to Ozark County for release.

Before leaving the Dickerson Park Zoo, I contacted Gainesville Elementary school to see if they would like for me to bring the bald eagle by for the summer school students to see before I took it to be released. They said they would love that. When I got to Gainesville Elementary, I gave two impromptu bald eagle presentations before taking the eagle to where I had captured it three weeks earlier and released it.

When I opened the cage on top of my truck’s bed cover, the eagle hopped out, hopped once on the bed cover and flew off. I stood and watched it for almost three minutes as it flew higher and soared farther away, making sure it was going to be strong enough to survive.

So, what was wrong with this eagle in the first place?

I asked the staff at the raptor rehab, and they told me it had what would be the equivalent to one of us having a dislocated elbow. They were able to set the “elbow” back in place and immobilize it for about a week.

Then they moved it to a flight cage where they could watch it as it tested the strength of its wing while they nursed it back to health. Once it appeared that its wing was going to be strong enough to carry it in flight to carry on a normal life in the wild, they contacted me so I could release it in the same area I took it from.

Fortunately, this story had a happy ending. They do not all turn out that way.

In fact, in the 19 years I have been a conservation agent here in Ozark County, I have taken about a dozen bald eagles to the raptor rehab.

This one was only the second one they were able to rehabilitate for release back into the wild.

Several years ago, I took them one that they were able to nurse back to health, but its wing had been so badly broken that it would never be strong enough to carry it in flight, so they kept it to use for educational programs.