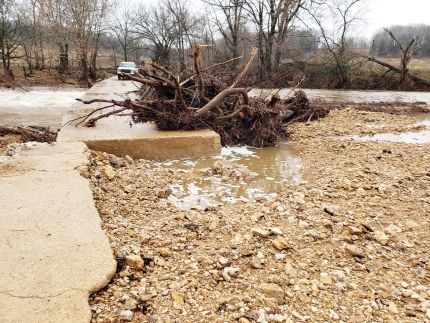 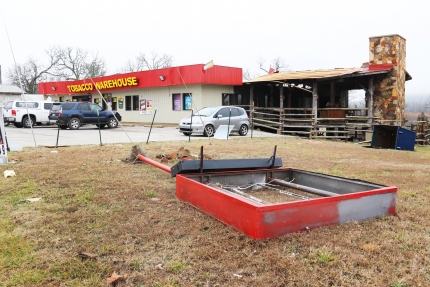 Tobacco Warehouse, Highway 5 south: Friday night’s storm tore almost all of the tin panels off the roof and side porch of the Tobacco Warehouse on Highway 5 at the state line. Owner Jesse Patel said the high winds also tossed a trash dumpster more than 125 feet across the property, upended the business’ heating and air unit, and ripped a large electronic sign out of the ground. The wind also scattered tin debris from the roof among the trees several hundred yards into the woods across the highway from the store. The Tobacco Warehouse is housed in the building that was formerly the Grapevine bar and restaurant. Times photo/Jessi Dreckman 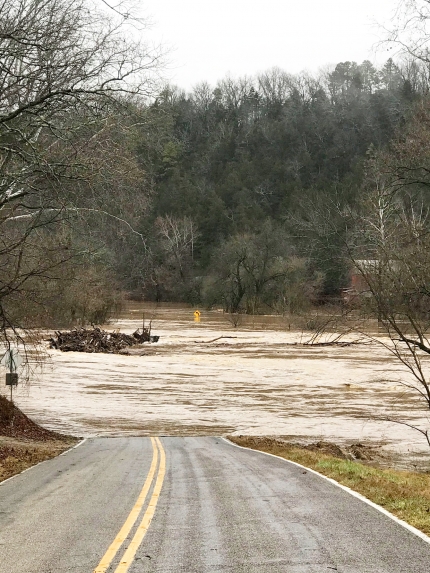 Highway 181 at Hodgson Mill: Highway 181 at Sycamore was closed Friday night and through the weekend as high water in Bryant Creek covered the bridge and crept up to Hodgson Mill, visible on the right side of the photo. The roadway had reopened by Monday morning. Photo courtesy Abigail Buchholz 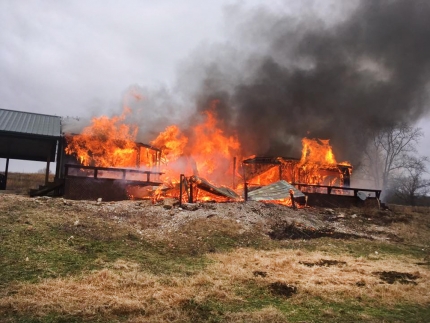 Nottinghill fire: On Sunday, Nottinghill resident Chris Dale posted on his Facebook page this photo of his home that burned Saturday, thanking friends for their “wishes and prayers” and adding, “In the end, all is well, no one injured, it was just stuff.” Theodosia Area VFD tried to respond to the blaze, with mutual aid from Gainesville and Pontiac / Price Place VFDs, but storm-closed roads kept them from reaching the property before they learned, from Wasola VFD, also responding in mutual aid, that the house was already “on the ground.” 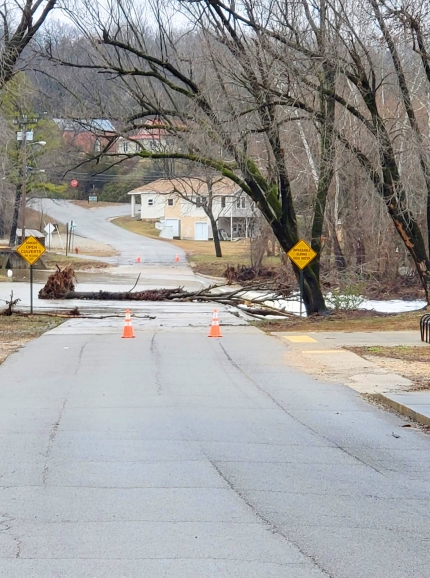 High winds in a Friday evening storm caused damage to buildings in some parts of Ozark County and also downed trees that blocked roads and took out power lines while heavy rain filled area streams to overflowing, closing many low-water crossings. The storm-closed roadways prevented the Theodosia Area Volunteer Fire Department and other departments responding in mutual aid from reaching a house fire Saturday.

One of the scattered reports of structural damage came from the Tobacco Warehouse, a business on Highway 5 at the state line in the building formerly occupied by the Grapevine restaurant. Owner Jesse Patel told the Times Monday that the wind tore tin panels from the building’s main roof and an adjacent side porch and also ripped the business’ electronic sign out of the ground. A large trash dumpster was blown about 125 feet across the property to where it is shown here. Security-camera video showed the dumpster zooming by the front of the building incredibly fast, he said.

After Ozark County Sheriff Darrin Reed issued a “roll call” on his Facebook page shortly before midnight Friday, asking about damage, a Caulfield-area resident reported the loss of an “old wooden barn” and a snapped power pole, and Mammoth-area dairy farmer Jerri Sue Crawford responded to say metal was blown off of the farm’s arena, “calf huts and babies [were] scattered everywhere” and a “huge cedar post roof brace” was blown out of the carport. A County Road 305 resident said underpinning was blown out their house, a window was broken and a metal water tank was carried 200 yards over a fence and into a ravine.

Howell-Oregon Electric Co-op spokesman Dakota Bates said Monday that 1,366 co-op members lost power as a result of the storm’s lightning and high winds throughout the co-op’s service area, which includes a portion of eastern Ozark County. He was unable to specify how many Ozark County members lost power, but he said crews were dispatched to the Tecumseh-area substation, which sustained some storm-related damage.

Also on the east side of the county, Highway 181 at Hodgson Mill and H Highway at Patrick Bridge were closed due to high water and debris Friday night and Saturday but had reopened by Monday, said Shawn Shipley, supervisor of the Missouri Department of Transportation shed at Dora.

The sheriff’s department received several calls about trees blocking roads and water covering stream crossings, and the Ozark County Commissioners at their weekly meeting Monday morning said County Roads 593 and 540 in the Bakersfield area, and County Roads 317 and 318 in the Tecumseh area were especially hard hit. Eastern District Commissioner Gary Collins said Warren Bridge and the bridge at Dawt were still closed Monday due to high water and debris.

Western District Commissioner Greg said Bull Shoals Lake had again covered County Road 863 at Haskins Ford. On Saturday, Donley had posted a photo on Facebook showing a County Road 830 creek crossing near Thornfield, advising, “This is the typical crossing in Ozark County today.” The photo showed a washed-out low-water bridge approach and a large pile of tree-and-brush debris blocking the slab itself. Monday morning, Donley said he expected most west-side county roads to be open again by that afternoon, except Haskins Ford.

A downed tree temporarily blocked O Highway near the Bakersfield School until it was removed by Bakersfield Volunteer Fire Department volunteers. High water and a downed tree also blocked the low-water bridge on North Main Street in Gainesville Friday night and Saturday before the water level dropped and the tree was removed.

The storm-closed roads made it impossible for Theodosia Area VFD to respond in time to help fight a fire at the home of Chris Dale off County Road 829 in the Nottinghill Area. The property is in the TAVFD district, and TAVFD chief John Lubbers told the Times Monday he and other TAVFD volunteers responded with a tactical vehicle, a tanker and two brush trucks, plus mutual aid from the Gainesville and Pontiac / Price Place departments, “but we didn’t ever get to the fire ourselves. We went up 829 … and got close, but then we came to a low-water crossing that was flooded.”

They backtracked and tried to take County Road 818 to County Road 831 around to the Dale property, but the caravan of emergency vehicles again hit another crossing, that one closed by trees across the slab.

“We backtracked again and went to Gainesville and headed up Highway 5, but by that time Wasola [VFD] was on scene and said the house was totally gone, so we turned around and went home,” Lubbers said, adding that they drove 67 miles in their unsuccessful attempt to respond to the fire.

Wasola VFD chief Scott Watson said the house was “on the ground” when his department arrived. The fire is suspected to have had an electrical cause, he said, adding that the Red Cross had been contacted. At press time Tuesday, the Times had been unable to reach Dale for comment, but he said in post on his Facebook page that no one was injured in the fire, adding, “it was just stuff.”