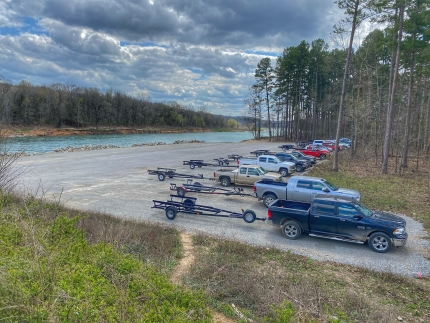 The parking lot at the Tecumseh access on Norfork Lake was filled this weekend after boaters and fishermen discovered an unexpected surprise – open gates to the access, which has been under construction for several months and mostly closed to vehicle and boat traffic since an historic flood in spring 2017 left the access heavily damaged. Corps of Engineers project manager Mark Case said the gates were opened to give fishermen “some temporary access.” Times photo/Jessi Dreckman 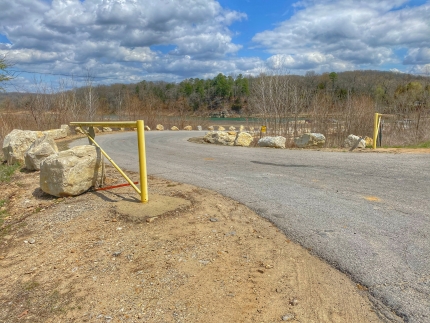 These Tecumseh access gates have been mostly closed since they were installed in March 2018. The access was severely damaged from a historic flood in the spring of 2019. The waters of Norfork Lake surpassed the Tecumseh bridge during the flood. Times photo/Jessi Dreckman. 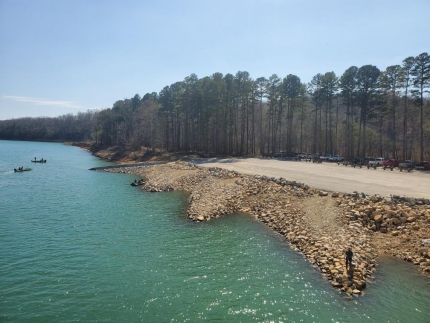 The newly poured boat ramp is angled toward the south side of the Tecumseh bridge and three new wing dikes, shown on the bank here. The wing dikes are man-made barriers that extend partway into the river that force the water into a fast-moving channel in the center, slowing water flow near the bank and ramps. The wing dikes should help prevent damage to the boat ramps during seasonal floods. Photo submitted/Ed Doiron. 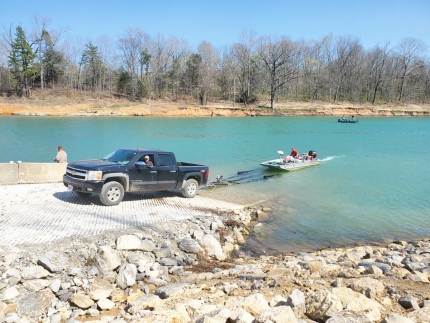 Fishermen Darren Smith and Josh Tooley said they got to the lake early Saturday and caught their limit of white bass by 2:30 p.m. Photo submitted by Ed Doiron. 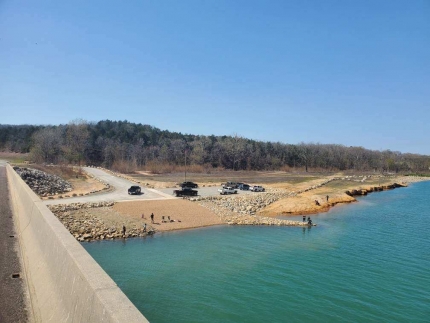 North of the Tecumseh bridge is a small parking lot and a pea-gravel covered canoe and kayak ramp. Photo submitted by Ed Doiron.

Fishermen got an Easter weekend surprise as the gates to the Tecumseh access on Norfork Lake were opened late last week and left open throughout the weekend, allowing fishermen and boaters to access Norfork Lake there. As of Monday morning, the gates remained opened. The access, which is in its final stages of a $1 million renovation project, has been mostly closed to boat and vehicle traffic since 2017.

The large graveled parking area and newly poured concrete boat ramp on the south side of the Highway 160 bridge were especially well used as fishermen with few other options for nearby lake accesses put in boat after boat.

The access area also features a smaller parking lot on the north side of the bridge, along with a pea-graveled canoe and kayak ramp. Large boulders line the parking lot, restricting driving access to what was once a campground area; however, those interested in accessing the lake by foot can fish and walk alongside the bank in that area.

The new poured-concrete boat ramp on the south side of the bridge is steeper than the former ramp that washed away in the historic flood of 2017. It’s also angled differently than its predecessor.

Mark Case, project manager for the US Army Corps of Engineers, told the Times Monday that the gates were opened “so some temporary access might be used for fishermen.”

He said the contractor is “waiting on the asphalt plants to start producing product so we can pave this area and finish the job.” With the asphalt plants expected to start any day, Case said his “best guess” is that the project will be completed in “a month or less after the plant is up and running.”

Then he added, “This is of course out the window if we get another flood.”