Advice from a conservation agent: ‘Rescuing’ orphaned and injured wildlife does more harm than good 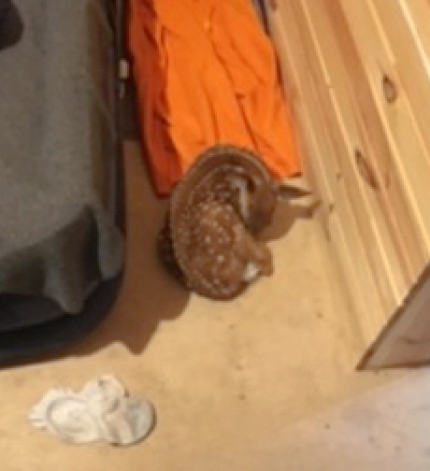 A few years ago, Missouri Department of Conservation agent Jerry Kiger was contacted by a local couple who had found this fawn by itself and brought it home to try and save it. The couple said they’d seen the fawn curled up in the county road without a mother nearby a week or so earlier and had brought it home because they’d assumed it was orphaned or abandoned. In reality, the mother was likely nearby and would have soon returned to find and retrieve the fawn. The well-meaning couple brought the wild animal home and fed it goat starter for a week in an attempt to try to save it. The fawn was able to stand and walk around when it was found, but by the time Kiger was contacted it could no longer stand on its own. Kiger took the fawn to a wildlife rehabilitation center, but by the next morning, it was dead.

This is the time of year when we get many calls about what to do with “rescued” or “orphaned” wildlife–mostly young wild animals. As a general rule, you should leave them be, put them back where you found them or, if necessary, move them a short distance out of harm’s way.

A baby wild animal on its own may appear abandoned, but the parent is usually around. Most baby animals will die if you try to raise them. Even if they do survive, many may not live long in the wild because they lack the survival skills typically taught by the parents.

We are also compelled to help injured animals, but handling them usually causes a great deal of stress and can do more harm than good.

While it may seem cruel not to help injured or baby animals, wild animals are part of nature’s food chain, and death is part of the cycle of nature.

Another reason to leave wild animals alone is that it’s generally illegal to take most animals from the wild and keep them captive.

One way you can help baby wildlife and other wild animals is by not introducing non-native predators, such as domestic cats, to your landscape. Young birds, especially ground-nesting species, can easily fall prey to cats.