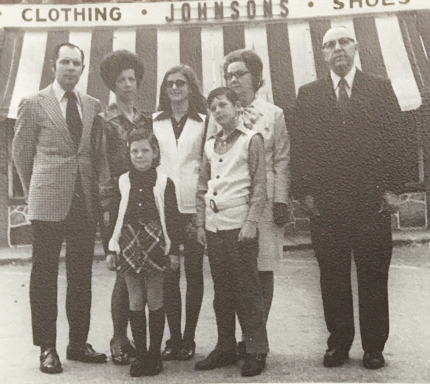 Pictured, from left, in this ad for Johnson's Clothing Store in the 1968 Gainesville High School yearbook are Rex Johnson and his family: wife Frances, daughters Lisa (front) and Teresa, son Eric, and parents Jessie and Frank Johnson.

Rex Johnson’s obituary in last week’s Times listed his accomplishments and the many ways he had served his family, community and church in his 89 years in Ozark County. It talked about Frances, his beloved wife of 63 years, and the three adoring children, Teresa, Eric and Lisa, they raised.

But the obituary didn’t say that Rex also helped nurture a bunch of “town kids” who swirled through his life for more than 60 years.

To those of us who grew up in Gainesville in the 1950s and 60s, Rex was an honest and steadfast father figure, a devoted one-man fan club for each of us. Wherever he encountered us – in Johnson’s Clothing Store, or First Christian Church, or the ball field or anywhere else – he always greeted us by name and made us think that simply by being alive in that moment we had made his day.

Rex knew us. But, more than that, he knew our parents, our grandparents, our aunts and uncles, dogs and horses. He even knew our shoe size. When our moms took us to Johnson’s each spring for our annual pair of Red Ball Jets, Rex could pretty much guess what size shoebox to reach for without measuring.

He was a gifted listener and equally talented at sharing compliments and jokes. Later, he made us feel welcome when, as adults, we came home again after being away.

He was proud of his family’s deep roots in Ozark County, and he loved sharing his family’s history – which he did in a Johnson family book he put together several years ago. He loved good stories, especially those that told some misadventure he or someone else had survived.

For instance, he loved the stories of when he and Marv Looney were attending SMS in Springfield and how they would hitchhike home to Gainesville on weekends. One Friday, through a series of upset plans, they ended up getting dumped out in Ava about midnight and had no choice but to share a room at a an old hotel there. Rex loved telling the part about the bed in the shabby hotel room having a rope tied to one leg “so that, if there was a fire, you could throw the rope out the window and climb down,” Marv said Monday, laughing at the memory he and Rex loved sharing.

Rex also told some good stories when he wrote about teaching a term at Seedtick School in 1949 for the Historium’s book “Lard Buckets and Paper Pokes.” He didn’t own a car then and rode to the school at Sycamore every day with a Mr. Pendergrass, who was superintendent at Dora. “Mr. Pendergrass had had his left leg amputated, and of course his car had a standard transmission,” Rex wrote.

With his skill at remembering colorful details, he described as “a work of art” how Pendergrass used the clutch, brake and accelerator with one leg as they traveled the roller-coaster road that is now Highway 181. “By the time we got to that real steep place at the top of the Zanoni hill, he had to be quick to get from the clutch when he shifted into low and back to the gas to get us on up,” Rex wrote. “Smoke would be coming through the dash about that time!”

Rex was just plain fun – even in church. In her eulogy at Rex’s funeral, Pastor Natalie Dixon-Crewell shared that Rex “never missed an episode of ‘Saturday Night Live,’ back when it was worth watching.” At church the next morning, he and Pam McGinnis, one of the grown-up Red Ball Jets town kids, would call each other “Lisa” and “Todd,” repeating their favorite lines from the ridiculous Lisa and Todd Loopner sketches.

Rex’s granddaughter Caroline loved coming to Gainesville and letting her “Gramps” show her off to his friends. One of her favorite stories happened when she and Gramps were headed to the square to have coffee with his buddies.

“We got all loaded in the Bronco, and I remember him smiling over at me – as he backed into the closed garage door!” she said.

But nothing would prevent Rex from enjoying a morning with his granddaughter. Gramps simply pulled forward, opened the damaged garage door, “and we were on our way to town,” Caroline said.

Rex’s favorite (and only) grandson, Matthew, still longs for more long summer days “talking and laughing and sharing stories” with his Gramps. He cherishes the times Rex and Frances would come to Springfield to pick him up from school and take him to get ice cream – and the times he spent “talking with Gramps about the world. We always tried to sit together at mealtime so we could keep talking or he could tell me stories,” Matthew said.

Sage McGinnis, who grew up going to First Christian Church with his “Nana,” Pam McGinnis, remembers that every Sunday when he was little, Rex would slip him a dollar bill. “And that dollar would go into the offering plate, something I looked forward to,” Sage said.

Now an EMT with South Howell Ambulance, Sage had just transported a patient to a Springfield hospital two weeks ago when his Nana texted him that Rex had died. Sage told her later that he “read that and cried all the way back to West Plains.”

“What did your partner say?” Pam asked him.

“It just shows what Rex meant to him,” Pam said later.

Many of us shared Sage’s reaction to the news. As Pastor Natalie said in her eulogy, Rex was “accepting and loving, and he cared deeply for this community. He treated everyone like they were the most important person.”

I hope Rex knew what an important person he was to all of us whose lives he touched.