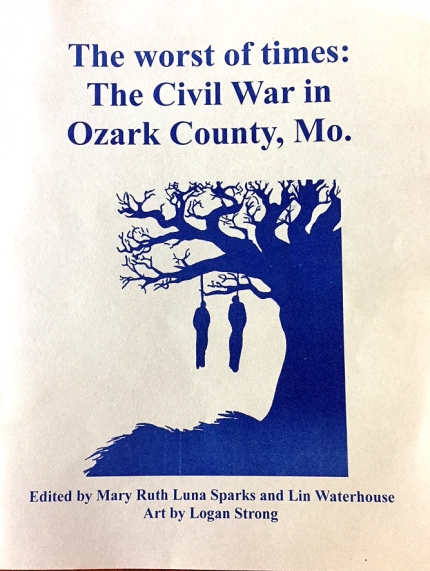 “The worst of times: The Civil War in Ozark County, Mo.,” originally published in 2012 has recently been reprinted by the Ozark County Historium and the Ozark County Genealogical and Historical Society. Renewed interest in the book, which has been out of print for some time, was sparked by the new Civil War discussion group that meets at the Historium at 10 a.m. on the third Thursday of each month.

The new Civil War discussion group that meets at 10 a.m. on the third Thursday of each month at the Ozark County Historium in Gainesville has sparked interest in the Civil War booklet of stories published in 2012 by the Historium and the Ozark County Genealogical and Historical Society. As a result, the 36-page booklet, “The worst of times: The Civil War in Ozark County Mo.,” which has been out of print for some time, has been reprinted.
Many of the stories were originally written by S. C. Turnbo around 1900. The booklet editors, Mary Ruth Luna Sparks and Lin Waterhouse, have edited the Turnbo stories to make them easier to read, shortening the sentences and paragraphs while retaining the original flavor and character of Turnbo’s turn-of-the-century writings.
The opening story describes a prophecy made by Dr. Every Milton at a “preaching” on the White River below the mouth of Big Creek in 1859 about “the future Civil War.” Milton even predicted that the war would last four years.
The editors say the booklet is not a history of the war but rather a look at how Ozark County families survived the violent conflict.
In a story about the Russell family, Ginya Collins Moore, a Russell descendant, tells how Wiley and Lucinda Russell, who lived in the Dora area, lost three sons and two sons-in-law during the war. During those dangerous times, it was safer to be a soldier than to be a young or old man at home. So, in an attempt to save their only remaining son, Wiley and his son Jim enlisted in the Union Army in 1864. Wiley was about 63, and Jim was 15, but the recruiter took them both anyway and listed Jim as 18 and Wiley as 44.
“The hanging,” a story written by Glain E. Martin for the Old Mill Run in 2009 about the deaths of Jesse Ballard James and John Riley Brown, is the subject of the artwork Gainesville High School graduate Logan Strong drew for the cover of the booklet.
While most of the stories are sad and sometimes even gruesome, the editors note there are also stories with a little humor. The editors’ favorite stories describe incidents involving the Casebolt women, who lived on Big Creek. In one story the Casebolt women defended their men against Union soldiers and won. In another, they successfully threatened and badgered three thieves from stealing their ox cart.
The booklet is available for $7 at the Historium or by mail for $10. Make checks payable to OCGHS and mail to P.O. Box 4, Gainesville, MO 65655.
Next meeting of Civil War group
The Historium’s Civil War discussion group will meet at 10 a.m. Thursday, Dec. 19, at the Historium. Again the group’s topic will be violent events in Ozark County during the war.
The group is open to anyone who would like to participate, and the Historium is easily handicapped accessible. The meetings are expected to last about 90 minutes.
For more information about the group, email Marc Ramsey at marcusd1949@gmail.com, or call him at 417-546-7170. Contact the Historium at 417-679-2400 or ozarkco1@ozarkcountyhistory.org.