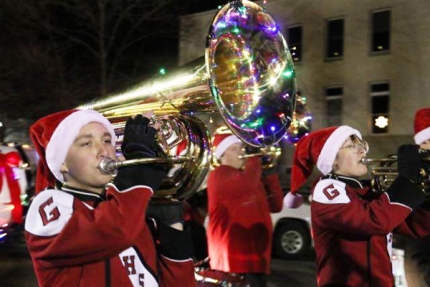 The Gainesville Bulldogs Marching Band, under the direction of Dr. Sherri Caraway, was a crowd favorite in the Jingle Bell Parade Friday night during Wonders of Christmas on the Gainesville square. Several of the band members, including trombonist Nathan Sanchez, pictured left, decked out their musical instruments with Christmas lights. 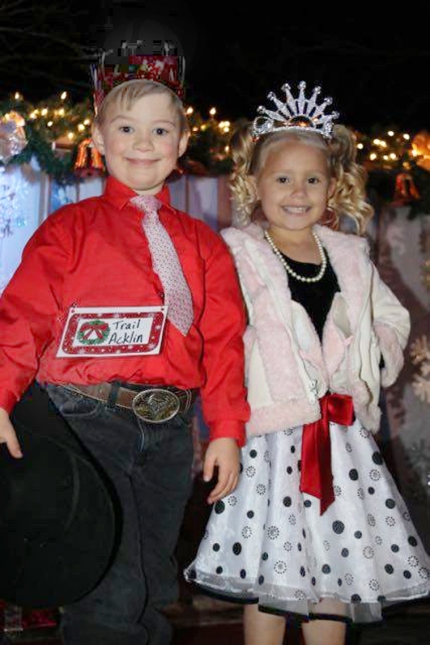 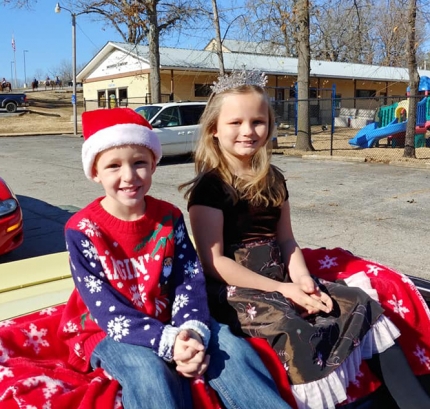 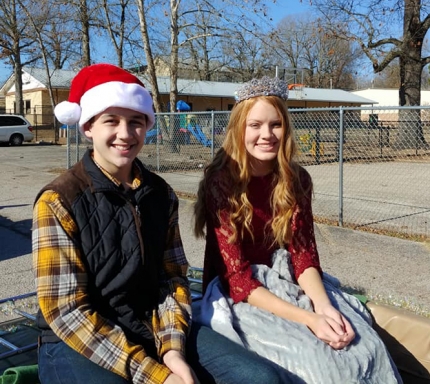 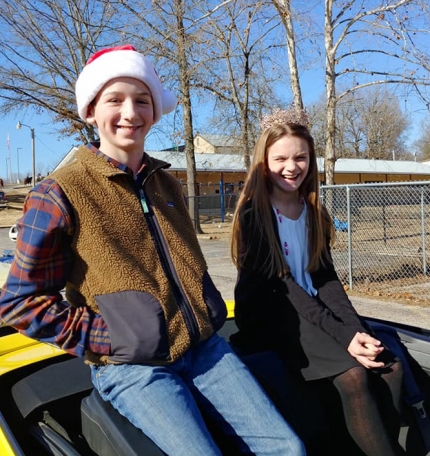 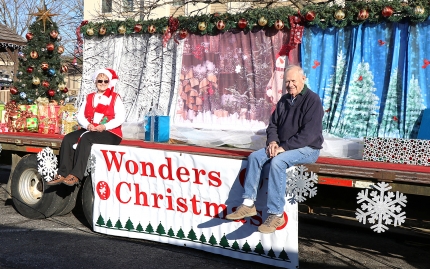 Stage decorators Doris and Wayne Sayles, with other helpers, spent several hours Friday decorating the stage to be used for the Mr. and Miss Merry Christmas pageant Friday evening during Gainesville’s Wonders of Christmas celebration. 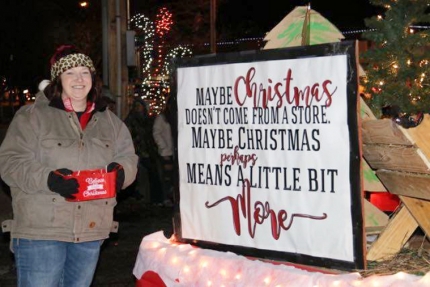 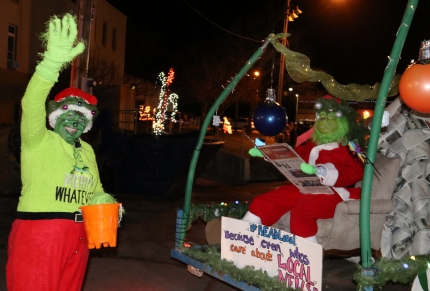 Grinchy fun Gainesville resident Carole Long dressed up as the Grinch as part of the Ozark County Times float. The float, themed the Whoville Times, won first place in the float contest. 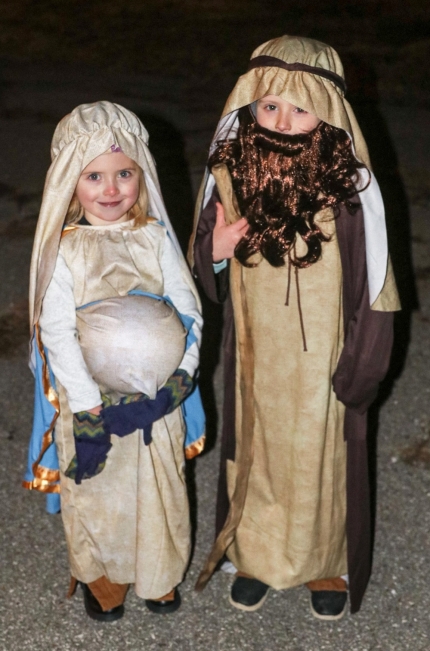 Little Mary and Joseph We wouldn’t have Christmas if it weren’t for Mary and Joseph, and thankfully, they were able to make it to the Wonders of Christmas celebration in Gainesville Friday night. Emery and Owen Hogan, children of Kyle and Sarah Hogan, dressed the part of the honored couple, reminding the crowd of the reason for the celebration. 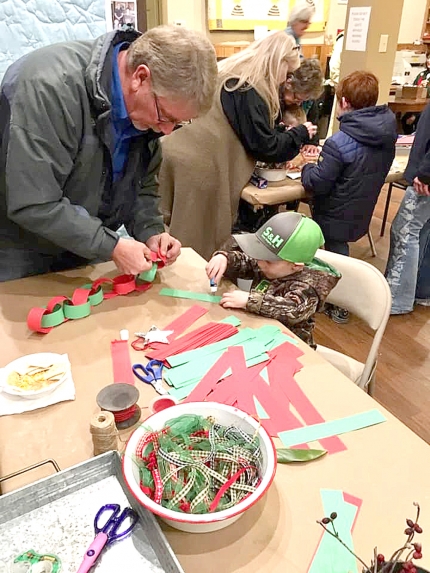 Old-fashioned decorating The Ozark County Historium hosted a decorating work station where youngsters like Landon Johnson, 2, with help from his “Papaw” Robby Strain, learned the art of paper chain making. Landon is the son of Laramie and Brianna Johnson of Gainesville. In the background, Historium volunteer Diane White helps her grandson, Lucas Wrinkles, 8, with his decoration. Many happy children helped decorate the Historium’s traditional Ozarks cedar tree with the paper chains, foil stars, paper cones and other decorations while many festival-goers slipped into the Historium to warm up with a bowl of hot soup or chili. In addition to the Historium, several other vendors sold tasty edibles and treats, as well as seasonal merchandise and crafts, and some Gainesville businesses were open to Christmas gift shoppers for the evening.

Small-town America was at its best Friday night on the Gainesville square as the Wonders of Christmas celebration got underway.
Twinkling lights. Sweet boys and girls all dressed up on a beautifully decorated stage for the Mr. and Miss Merry Christmas pageant. Good things to eat and hot things to drink. A huge parade. Shops filled with customers. Booths selling handcrafted items and homemade goodies. The scent of the Historium’s big cedar tree filling the air as children decorated its branches with their handmade paper chains and foil-covered stars. Secret wishes whispered to Santa. And an appearance by Mary and Joseph, reminding everyone attending Who was being celebrated.
The evening was the culmination of weeks of planning, organization, phone calls and many hours of volunteer work by a small committee and its helpers. “It does take a lot of planning on the committee’s part, but it wouldn’t come together without the community members we know we can count on to lend a hand whenever asked,” said committee chair Allisa West.
The evening began at 6 p.m. with the Mr. and Miss Merry pageant on the west side of the square. “Wayne and Doris Sayles donated all the beautiful stage decorations, and Kerrie Zubrod always does a beautiful job with the pageant,” West said.
Nine 4- and 5-year-old boys and girls dressed up in their finest to participate. Trail Acklin and Adaleah Moore were crowned. Trail is the son of Rockie and Trisha Acklin, and Adaleah is the daughter of David and Sara Moore. All participants received presents at the end of the pageant, so no one left disappointed.
This year’s Christmas parade was the biggest in history, with more than 40 entries including a dozen decorated floats, firetrucks from all over the county, the Gainesville Bulldogs Marching Band, local businesses, classic cars, horses and of course, Santa and Mrs. Claus.
“Paula Rose knocked it out of the park with the Christmas parade,” West said. “Ed Doiron did a great job blocking everything off and keeping everyone safe for the event. Doug Hawkins, Debra Miller, and Billy and Mindy Pippin helped Paula make sure the parade ran smoothly.”
The Gainesville Vet Clinic was named the Shelter Insurance Douglas Hawkins Spirit of Christmas grand prize float and was awarded the $150 award for its pet-themed float carrying a host of cute children and their pets, followed by Brantley Nash’s pony, Dakota, decked out as a hound dog. The Ozark County Times took first place, with our “Whoville Times” float, complete with the Grinch portrayed by Times reporter Jessi Dreckman’s mom, Carole Long. Gainesville High School Fellowship of Christian Athletes (FCA) took second place with their beautifully lit and decorated float based on the Dr. Seuss quote, “Maybe Christmas doesn’t come from a store. Maybe Christmas, perhaps, means a little bit more.” Wilson Industries placed third with its float sporting giant candy canes made of the plastic pipe the company manufactures at its plant north of Gainesville.
Retail businesses stayed open late for the event, and additional vendors, organized by Pearl Schneider, offered unique, handcrafted items for Christmas shopping purchases.
A highlight, according to many, was the Ozark County Historium, where chili and soup, along with cookies and desserts, were served while children made old-fashioned decorations for a traditional Ozarks cedar Christmas tree the volunteers had set up.
“The evening was a resounding success!” said volunteer Janet Taber. “We sold completely out of soup and chili and helped many happy children learn to make paper chains, paper cones, foil-covered stars and other handmade Christmas tree decorations. If we inspired one child to go home and make some more, it was well worth the effort. Keeping traditions alive is what the Historium is all about, and we hope taking part in the community Christmas festivities is our own newest tradition.”
West said the Christmas spirit was felt throughout the evening. “Everyone, from the vendors to the businesses who decorated their vehicles and threw out candy, just seemed to be in the Christmas spirit, and worked together to make it an amazing event for the community,” she said. “I hope it continues to grow and becomes a special memory for our kids for years to come.”