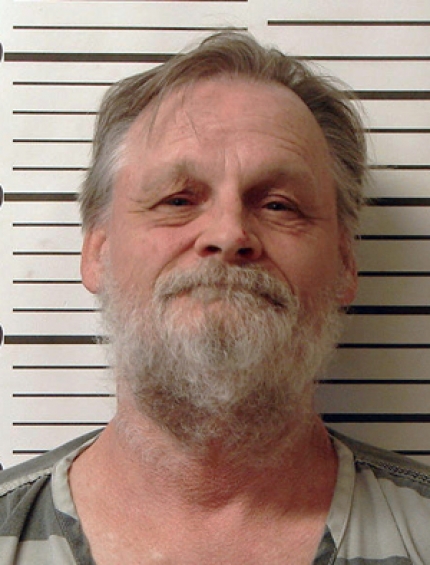 Barry Scott Brown, 54, of Caulfield, who in April allegedly held his wife at gunpoint with a shotgun and held her 9-year-old son at gunpoint with an “Uzi-type firearm,” has been found incompetent to stand trial and was recently committed by the court to the custody of the Missouri Department of Mental Health.
According to an order of commitment filed in the case, Brown appeared May 17 before Associate Judge Cynthia MacPherson, who reviewed the findings set forth by the Missouri Department of Health’s forensic evaluation, dated May 15, and found that Brown “lacks capacity to understand the proceedings against him or to assist in his own defense, and … lacks mental fitness at this time to proceed with the charges against him.” Brown’s upcoming court hearing, scheduled for July 10, was canceled and removed from the court’s calendar.
The order of commitment says the director of the Department of Mental Health is to report back to the court in six months with a determination of whether Brown has regained his competency to stand trial or, if he has not regained competency, whether there is a substantial probability that he will or will not regain competency to proceed in the foreseeable future.

The allegations
Brown was originally charged with three felony counts including unlawful use of a weapon – exhibiting, endangering the welfare of a child creating a substantial risk and armed criminal action in connection with the incident.
According to the probable cause statement, a dispatcher received a call at 9:21 a.m. April 19 about a person holding a woman and a child at gunpoint at a Caulfield residence. While Ozark County Chief Deputy Winston Collins was en route toward the home, a dispatcher told him by radio that the victims had left the residence and would meet him at Highways V and 160. When Collins arrived, Brown’s wife, her 9-year-old son and another individual were waiting, the statement says. The woman reportedly told the officer that Brown had left the residence and was traveling toward West Plains in a blue Toyota RAV4 with an “Uzi-type firearm with a silencer” in his possession, according to the report.

Stopped in West Plains
Ozark County Sheriff Darrin Reed notified the West Plains Police Department of the situation, and shortly afterward WPPD told notified Ozark County that WPPD officers had stopped Brown in his vehicle.
Collins and Reed drove to the scene, where West Plains officer Brandon Romans had Brown pulled over for a traffic stop. When the officers arrived, Romans told Collins and Reed that Brown had three firearms in the vehicle: two semi-automatic pistols and an Uzi-type firearm with a large suppressor. Romans said Barry had reportedly held another individual at gunpoint at a gas station in West Plains. Collins seized the Uzi-type firearm for evidence. The gun, which was later identified as an M-11 9mm, was loaded with a live round in the chamber and a magazine holding an unknown quantity of ammunition, the statement says. WPPD secured the other two firearms for safekeeping.

Both sides tell their stories
Brown was placed under arrest and transported to the Ozark County Jail. He reportedly made “several admissions” about firing a gun the night before and told the officers he had popped off a few rounds that morning. Brown acknowledged that he had threatened his wife with a gun when she wouldn’t leave the residence, the statement says.
After Brown’s arrest, the officers spoke with his wife again, the statement says. She reportedly told the officers that the previous night, on April 18, Brown pointed the “Uzi” at her 9-year-old son and pointed a shotgun at her. The woman said during the heat of the incident, Brown actually discharged the shotgun inside the house while both she and her son were there. The woman said the boy was frightened and crying.
When Brown was interviewed by officers, he reportedly told officers that he shot his “scatter gun” (referring to a shotgun) at his computer during a conversation between himself, his wife and his wife’s relatives. Collins said  in the report that he perceived Brown to mean that the conversation was a video conference via the computer.

Crime scene
After the interview with Brown, Collins went to the residence and found numerous firearms and ammunition throughout the common area, according to his report. A 12-gauge TTN International Model 1878 double-barreled shotgun, loaded with two live rounds, was also found, the report says.
Collins unloaded the firearm and seized it as evidence. He also photographed the computer, television and window that had been shot. He found ammunition on the floor as well as loaded AR-15 magazines and rifles stacked against the wall and pistols on the couch arm. The ammunition was in bags, boxes and loaded magazines.