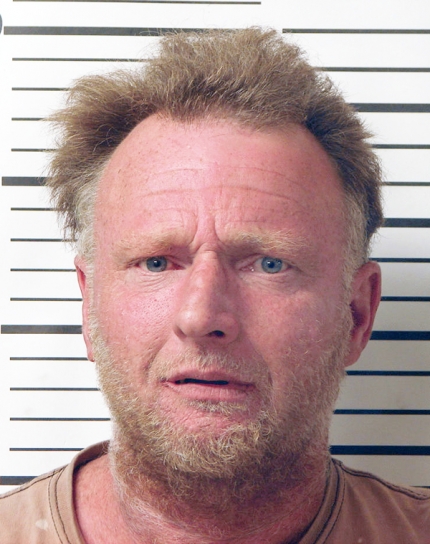 Brent Harrison, 48, of Isabella, is currently being held in the Ozark County Jail on a $100,000 cash-only bond in connection with an incident in which Harrison allegedly fired a gun into a vehicle with a woman and two children inside. Harrison faces felony charges of unlawful use of a weapon and two counts of endangering the welfare of a child, creating a substantial risk. He is represented by public defender Spellman Robertson and is scheduled to be arraigned June 12 before Associate Circuit Judge Cynthia MacPherson.
According to the probable cause statement in the case prepared by Ozark County Chief Deputy Winston Collins, on May 29 the officer received a call about someone shooting at another person at a residence in Isabella. Collins responded to the residence and spoke with a woman who told him  that as she was driving away from a residence on County Road 618, Harrison, who had recently moved out of her residence, fired a gun at her while her 7-year-old and 12-year-old children were in the vehicle.
Collins, along with Ozark County Sheriff Darrin Reed and Cpl. Curtis Dobbs, traveled to Harrison’s residence on Beard Lane in Isabella. There, Harrison reportedly told Reed that his girlfriend of 24 years came onto the property and was cussing and flipping him off, which resulted in him discharging his shotgun. Harrison reportedly told the officer that the discharge was a “warning shot,” and he had told his girlfriend “not to come back or I’ll put it in her head next time.” The statement says that Harrison was visibly angered and frustrated while speaking with the officers.
When Collins asked Harrison where the shotgun was, he told the officers it was in the bed of his pickup. Dobbs retrieved the firearm, and Collins placed Harrison under arrest. Dobbs reportedly told Collins that a spent-shot shell casing was chambered when he seized the firearm, which was described as a single-shot 12-gauge shotgun.
After Harrison was transported to the Ozark County Jail for questioning, he reportedly provided a written statement indicating that, after his girlfriend flipped him off, he had discharged the shotgun, knowing children were in the vehicle when he fired the shot.
The charging document in the case says the class E felony of unlawful use of a weapon has been filed against Harrison because he “knowingly exhibited, in the presence of one or more persons, a 12 gauge single shot shotgun, a weapon readily capable of lethal use, in an angry or threatening manner.” The two class D felony counts of endangering the welfare of a child have been filed because Harrison “created a substantial risk to the body and health of … a child less than 17 years of age, discharged a single shot 12 gauge shotgun into the immediate are where the child was present.”