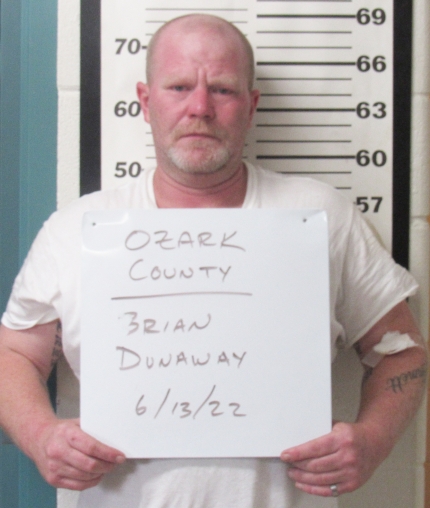 The probable cause statement, prepared by Ozark County Sheriff’s Deputy Matt Rhoades, explains that the deputy was assigned to a call of a shooting at a residence on County Road 527, west of Gainesville, at 4:35 a.m. that morning.

It was reported that 27-year-old Dewayne “Ed” Wessel was dead as a result of the incident.

Rhoades arrived and found Wessell’s body lying on the floor inside the residence. Deputies attempted life saving measures, but they were unsuccessful.

Rhoades made contact with Dunaway, who the officer recognized from past interactions, the report says.

“Brian stated he shot another male in self-defense. My current investigation has led me to believe this is to be the case,” Rhoades’s report explains. “…but during the investigation I located in plain view a green waterproof type of container with a clear plastic bag containing a white crystal-like substance, which I recognized with my training and experience as amphetamines.”

Dunaway was read his Miranda rights, and the suspect reportedly told the officer that he had been using methamphetamines the night before.

The container where the drugs were found was located in a recliner that Dunaway referred to as his “bed,” the report says. He told the officer he didn’t know there was any meth left in the container, as he thought he’d used it all the night before.

Dunaway agreed to allow officers to draw his blood for chemical analysis. He was transported to the Ozark County Jail, where he is currently being held.

The firearm, a black semi-automatic handgun, was recovered, and Dunaway admitted that the firearm was his.

Although the official court records do not mention circumstances involving a domestic violence situation prior to the shooting, the log made by a dispatcher during the call and a Facebook post made by the Ozark County Sheriff’s page after the incident both refer to a violent incident.

The dispatcher’s log says that Dunaway called 911 at 4:35 a.m. and said that he had shot and killed Wessell. He said the gun he used had been unloaded and was lying on top of a truck.

Dunaway then reportedly explained what led to the shooting, telling the dispatcher that Wessell was drunk and talking about committing suicide - then went after his (Wessell’s) fiancé and began choking her and trying to kill her. He said that is what led him to shoot Wessell.

The Ozark and Douglas County Sheriff’s Departments and Missouri Highway Patrol are involved in the investigation.

Wessell was pronounced dead at 6 a.m. June 13, by Ozark County Coroner Gene Britt. His body was sent to Ozark where an autopsy will be performed, as is customary with homicide cases. It will likely be several weeks before results are released.

He was arraigned before Associate Circuit Judge Raymond Gross and is scheduled to appear for a bond reduction hearing at 1 p.m. June 22.