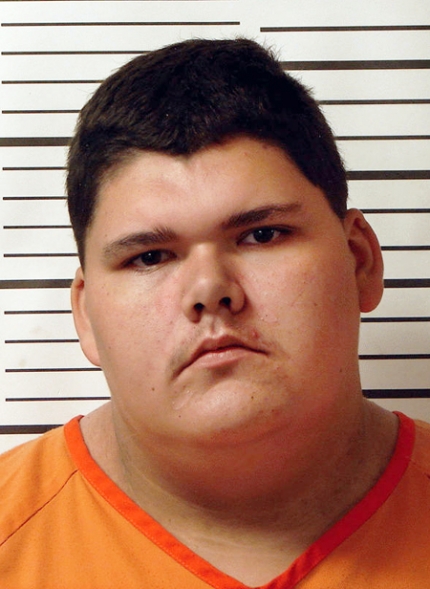 The Ozark County Sheriff’s Department arrested a Dora High School student Tuesday, Sept. 25, after the student allegedly made a threat through a private Facebook message, sharing a plan to drive a truck through the school wall into the cafeteria, detonate explosives inside the room and “kill everyone who has bullied him.”

Skyler Ledbetter, 17, a junior at Dora High School, is being held in the Ozark County Jail on a $25,000 cash-only bond after a class E felony of making a terrorist threat in the second degree was filed against him last week.

“Dora School did a great job,” Collins told the Times Monday. “Administration addressed the matter without delay and notified me immediately. At no time was any faculty, staff or students in any danger.”

According to online court records, Ledbetter was arraigned on the charge before Associate Judge Cynthia MacPherson on Sept. 26. Public defender Spellman Robertson was appointed to represent Ledbetter, and a telephone conference was held at noon Monday. Robertson filed a request for discovery under Rule 25.03, which requires the state to disclose to the defendant’s counsel material and information against the defendant including any reports, incident reports, investigative reports, written or recorded statements, documents, photographs, video, electronic communication and electronic data related to the offense for which the defendant is charged. Ledbetter is scheduled return to court for a hearing before Macpherson Oct. 9.

According to the probable cause statement prepared by Collins, the sheriff’s department received a call at approximately 8:30 a.m. that Tuesday indicating a Dora School administrator had been told that a student had made a threat to the school and its students inside.

Collins immediately responded and met with Dora K-8 principal Brett Mitchell and school superintendent Steve Richards. The administrators reportedly told the officer that a student, whose identity is being kept private, told Mitchell that he or she had received a private message from Ledbetter referring to his “actual plan” to show up at school at lunchtime, drive his truck through the school’s cafeteria wall, detonate a bomb and kill everyone who had bullied him.

Richards said that as soon as Mitchell was made aware of the threat, Ledbetter was removed from the classroom and escorted to the office, where both he and Mitchell stayed with him. The sheriff’s department was immediately notified of the threat, Richards said.

After speaking with the administrators, Collins reportedly questioned Ledbetter in a school office. Ledbetter initially denied sending the message and suggested his phone had been hacked, the document says. However, after several minutes, he reportedly acknowledged sending the message and told the officer that “’voices’ told him what to do.” Ledbetter told Collins he planned to ram his truck into the cafeteria and detonate the explosives, the statement says.

Dora R-III School District posted this message to its Facebook page at 3:57 p.m. the day the threat was reported: “This morning we received information of a possible threat to our District. A 17-year-old male made a threat toward our District. Ozark County police were notified and are completing their investigation. Students and staff were all safe during this time. I will send out a letter with more information as a receive it.”

The message was followed by a letter sent to parents on Sept. 27 indicating that “there was no immediate threat to the district or its student body, as the student was detained in the office.” The letter says the Ozark County Sheriff’s Department was immediately called and arrived at the school within 25 minutes, and the student was turned over to the custody of the sheriff’s department.

“At all times, our students were safe, as the threat was in the planning stages when discovered. The situation did not necessitate a lock down, because it was discovered before any potential action by the student occurred,” the letter said.

In response to a few parents’ comments on the Dora School’s Facebook page post asking why parents weren’t notified immediately (the initial post was made approximately seven hours after the threat was reported), Richards wrote: “I apologize for any misunderstanding that was created by the incident being posted on Facebook. From our perspective, the district has to have facts, not assumptions, before we provide information to our patrons.”

Richards said that he did receive a few calls from parents after the letter was sent, but almost everyone he spoke with was receptive to the letter or to follow-up conversations explaining the situation.

The letter concludes by saying Ledbetter will not return to Dora School. Richards has the authority to suspend Ledbetter for a total of 180 days, and he told the Times Monday that he will instate that suspension for the full amount of time. After the 180-day period, the Dora school board then has the authority to instate a permanent expulsion.

“Right now we’re still following the due process,” Richards said. “So I cannot officially say he is expelled, but he will be permanently banned from the Dora School campus. We plan to do anything and everything we can to ensure our school and our students are safe.”

Richards says that any students who are experiencing situations in which they are being bullied should reach out to anyone in the district.

“Whether that’s the counselor, a classroom teacher or anyone else,” he said. “That way the administration is aware and can take the right steps to handle the situation.”

With this threat, some district residents say Dora’s decision to have armed school employees on campus at all times seems more relevant than ever. The school gained national media attention after a feature about the district’s decision to arm teachers was aired on the Today Show in March.

“We obviously feel more comfortable when a situation arises like this,” Richards told the Times Monday. “In this specific situation, it didn’t change the way anything was handled. But there could be an instance when the threat is more severe, causing a lockdown or other measures, and it’s reassuring to know that a system is in place to help from the time a threat is made until authorities arrive.”

Richards says this school year marks the fifth year Dora has had armed school employees. He says at least two employees, who complete a required weeklong training, are armed at all times on campus.

Threat at Bakersfield School in February

Ledbetter isn’t the first Ozark County student to be charged with making a threat at school.

Derek Beaver, 19, is currently facing a class D felony of making a terroristic threat in the first-degree in connection with a February incident in which he allegedly told several fellow Bakersfield School students he was going to bring a gun in and “shoot up the school.” Beaver also reportedly boasted about having an M-16 rifle,  an AK-47 and other firearms, according to the probable cause statement. At the time of the alleged threat, Beavers was a senior at Bakersfield.

He is scheduled to appear in circuit court before Circuit Judge Craig Carter today, Oct. 3. He  was originally held on a $100,000 cash-only bond but was released with supervision on Feb. 27. An April 10 order allowed his bond to be amended, allowing him to travel to Arkansas for counseling and medical care. A May 15 condition was also added, allowing the GPS monitoring bracelet to be removed and Beavers to be allowed to leave the state for employment.

Bakersfield superintendent Amy Britt confirmed Monday that Beaver had received a diploma but declined to say how he had finished his schooling, citing confidentiality requirements. She said the Missouri Department of Elementary and Secondary Education provides flexibility for school districts to facilitate students’ studies in various ways, including correspondence and online courses and “distance learning” opportunities when they’re unable to attended classes at their school.