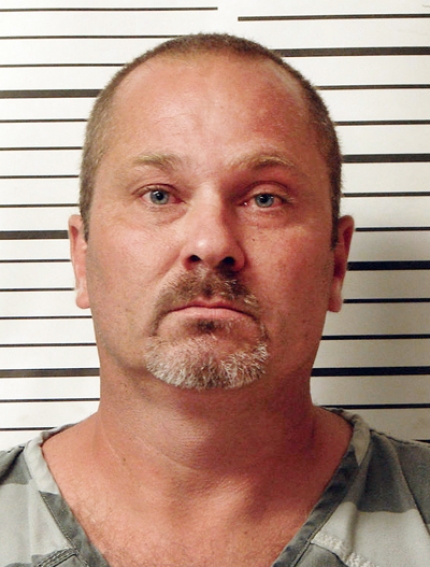 Ava resident Darrell W. Gunter, 47, is currently being held in the Ozark County Jail on a $100,000 cash-only bond after he allegedly climbed a tree, entered a woman’s house without her knowledge and waited with her firearm for her to enter the room.

Gunter, charged with first-degree burglary, stalking and armed criminal action, was scheduled to appear before Associate Judge Cynthia MacPherson Tuesday to be arraigned on the charges. Results of the court appearance were not available at press time.

According to the probable cause statement in the case, Ozark County Chief Deputy Winston Collins received a call at 7:30 a.m. Sunday, Sept. 9, from a woman reporting a residential burglary and violation of an order of protection. Collins wrote in his report that he went to the woman’s residence, and that she was “extremely emotional and exhibited fear of Darrell Gunter.”

She told the officer she had dropped her child off at a family member’s house and returned home to get ready for work that morning. After coming inside, she laid the gun she was carrying on the kitchen counter and went into another room to get ready for work. When she walked back into the kitchen, Darrell Gunter was reportedly standing in the room holding the gun.

The woman then went to Gunter and hugged him, attempting to reason with him out of fear, the statement says. She asked him how he got into the house, and he reportedly said he climbed a tree outside and entered through a balcony door. Gunter voluntarily gave up the firearm, and the woman drove him to his vehicle, which he had hidden in a nearby field. The woman left him at his vehicle and immediately contacted the sheriff’s office. The call was made at approximately 7:30 a.m., and by 10:30 a.m. Collins and officers with the Douglas County Sheriff’s Office had located and arrested Gunter at a residence on Fifth Street in Ava. He was wearing woodland camouflage tactical pants, a tan shirt and tactical-style boots.

Collins contacted the woman and asked her what Gunter was wearing when she left him in the field by his vehicle. She reportedly told the officer he was wearing “army pants and a tan shirt,” a description that matched Gunter’s clothing when arrested.

Collins wrote in his report that Gunter had been arrested Aug. 30 for violating the ex-parte order of protection, which had been filed with the court on June 27, ordering  Gunter to have no contact with the woman, including through text, email, phone or by social media. He was also banned from being on the premises or within 120 feet of the woman’s house. The protection order was filed based on a previous report in which Gunter had allegedly left the woman a voicemail saying, “You should have looked up in the tree yesterday morning when you were taking pictures of your vehicle,” the probable cause statement says.