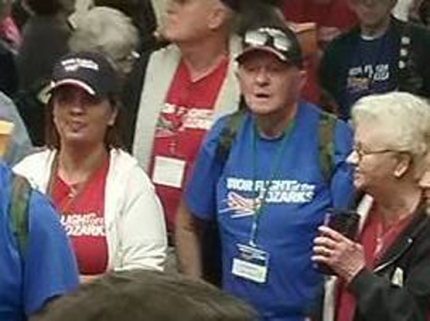 Hundreds of people, including Gov. Eric Greitens, many active-duty military men and women and a Shriners band, were waiting to welcome Lee Burnett and the other veterans when they returned to Springfield National Airport from their Oct. 24 Honor Flight. From left, daughter-in-law Mary Burnett, who accompanied Lee as his guardian, with Lee and his wife, Nancy. 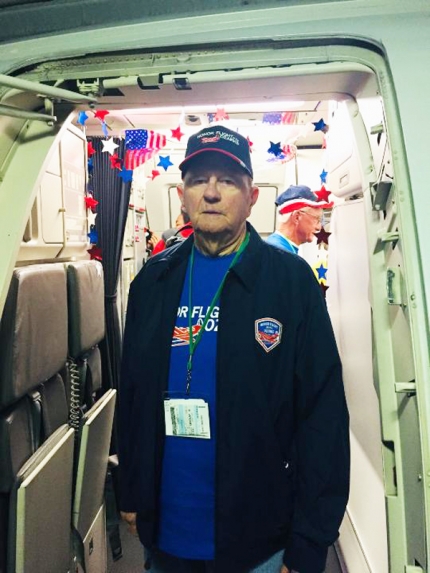 Lee Burnett pauses for a photo in the door of the airplane that would carry him to Washington, D.C., Oct. 24 on an Ozarks Honor Flight.

Theodosia resident Lee Burnett, 79, had a very long day last Tuesday, Oct. 24, but it was an exceptionally good one. It was the day Burnett, an Army veteran, participated in an Ozarks Honor Flight to Washington, D.C.

Even though he and his wife, Nancy, and their daughter-in-law, Mary Burnett, spent the night at a Springfield hotel, they still had to get up Tuesday morning at 1:30 so they could get to the airport on time. “The flight wasn’t due to take off until 5:30, but we had to be there two hours early,” Nancy said. “There were 189 veterans and their guardians and volunteers on the flight plus the airplane crew.”

The group visited the World War II, Korean and Vietnam war memorials and enjoyed views of other monuments too. But Lee said of all the places they visited in that busy, sight-filled day, his favorite was the Tomb of the Unknown. He was especially fascinated by information on a fact sheet that talked about the soldiers who serve in the Tomb guard.

“For the first six months of duty, they don’t talk to anyone!” Lee said. “They don’t watch TV or anything, not at all.”

Nancy also shared a section of the information sheet that says, “At the conclusion of the Changing of the Guard ceremony, when the sergeant is retiring from the area ... you may notice him shuffle his feet three times. That is his salute to the Honor Flight veterans in attendance.”

Lee, who was drafted and served in the Army from 1961 to 1963, completed his basic training in Kentucky and then completed eight weeks of infantry training at Ft. Chafee, Arkansas, before serving the rest of his tour at Ft. Lewis, Washington, where his primary job was “driving a captain around in a Jeep,” he said.

He grew up in southeast Missouri.  He and Nancy, a native of Rock Island, Illinois, were married 11 days before he was inducted. He said he “didn’t enjoy the Army when I was going through it, but looking back, I had a lot of fun.”

After his Army service, Lee and Nancy lived in Illinois, where Lee worked for International Harvester. In 1981, when then-President Reagan fired 11,000 striking air traffic controllers who ignored a return-to-work order, International Harvester sent two busloads of union members to Washington to protest Reagan’s action. Lee was one of them. That was his first visit to DC. After he and Nancy retired to Ozark County 24 years ago, he and Nancy enjoyed a bus tour that included the nation’s capital. So last week’s Honor Flight was his third time there.

Their son Andrew and his new wife, Mary, suggested that Lee make the trip. When he agreed to it, Nancy signed him up online, and Mary signed up to be his guardian, accompanying him on the trip. Honor Flight’s goal is to take veterans who served during wartime to Washington and also those who have serious health problems – which includes Lee.

The Burnetts also have a daughter, Rene Rains.

During “mail call” on the flight home, the veterans were given envelopes containing letters and pictures from friends, family members and area students. Lee found 44 letters and pictures in his envelope. The youngest artist was 3. “It’s just a scribbled picture, but it still means something,” Lee said.

When the plane landed back in Springfield about 8:30 p.m., the veterans were surprised to find Gov. Eric Greitens – and hundreds of  other folks – waiting to greet them. “They were lined up on both sides of the hallway and the side hallway, and there were lots of kids. They all wanted to shake the veterans’ hands,” Nancy said.