After 60 years, state record for largemouth bass still stands, despite son’s efforts to top it 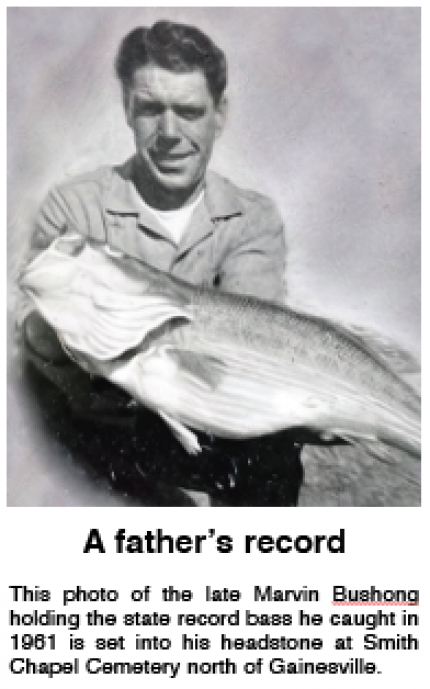 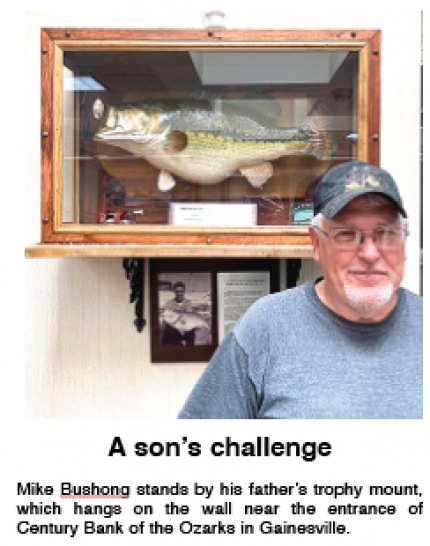 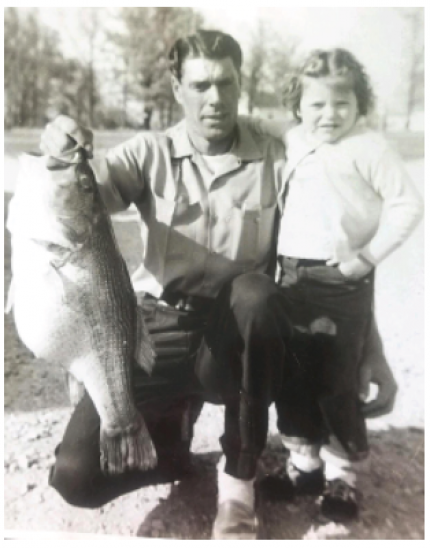 Gainesville resident Lana Bushong, shown in this 1961 photo, remembers being “a little afraid” of the monster fish her dad, the late Marvin Bushong, brought home. 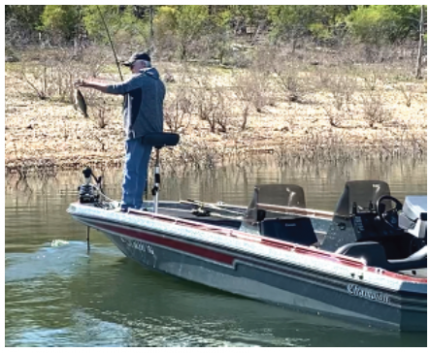 Mike Bushong doesn’t broadcast the exact spot where his dad in 1961 caught the 13-pound, 14-ounce largemouth bass that set a new state record, but he fished there last week. He believes the lake’s water level was a little higher six decades ago, and the spawning bed may have been in brush now exposed on the pea-gravel-bank. 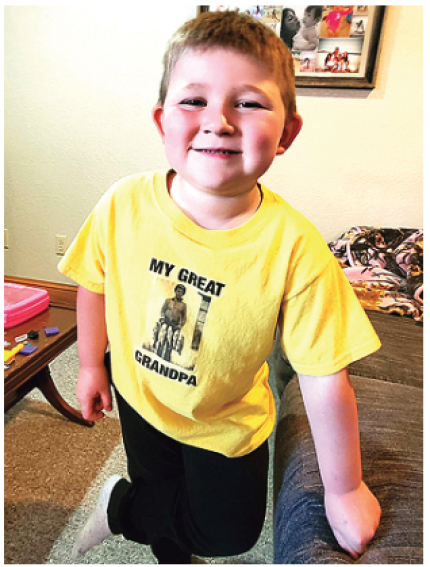 Mikey Laird, 3, son of Carrie Bushong Laird, wears a T-shirt his Aunt Lana Bushong had made for him showing his great-granddad, Marvin Bushong, with a stringer of fish he had caught.

By W. Kim Sexton, Special to the Times

Editor’s note: W. Kim Sexton is a retired third-generation newspaper editor and publisher who still handles investigations of his choice. This story completes his goal of visiting the site of a Missouri fishing record on the date of its diamond anniversary.

A diamond anniversary sparkled in the mind of Mike Bushong. The retired 68-year-old Gainesville angler didn’t break a Missouri largemouth bass fishing record set by his father six decades ago, but he sure had fun trying.

The late Marvin Bushong caught a 13-pound, 14-ounce monster on April 21, 1961, just inside the Show-Me State and across from what is now the Pontiac Cove Marina on Bull Shoals Lake. It wasn’t an easy catch. His fishing reel was falling off the pole, and he had to hand-retrieve line, lure and lunker, and then reach down and grab the fish by the mouth.

Many anglers have, through the years, speculated that the big prize may have traveled from the southern reaches of the lake in Arkansas to spawn in Missouri. Fish tend to grow larger in southern lakes because their dormant feeding season is shorter.

Mike Bushong, Marvin’s son, boated last week to the exact spot where the big fish was landed. “You can see Arkansas going to the ‘honey-hole,’” Bushong said.

Some big fish were caught in a recent flood but nothing close to 14 pounds.

If Bushong had caught his bass in Arkansas, it would not have set a record. On Feb. 28, 2012, Paul Crowder of Forrest City, Arkansas, caught a 16-pound, 5-ounce bass on Lake Dunn near Wynne. It was only an ounce larger than the previous record, which had stood 36 years.

Bushong’s monster first weighed 14 pounds at the Pontiac Boat Dock but was kept on ice many hours before conservation officials were able to assess it. It was full of eggs, and Mike Bushong believes it was possibly attempting to move his dad’s black, deep-diving spinnerbait from its spawning bed.

Mike made many unsuccessful casts for several days before the anniversary as he fondly recalled the now-legendary story and, sadly, how his father couldn’t continue his favorite pastime very long. He suffered an apparent heart attack at age 44 while angling with a trot line on another White River chain lake, Norfork Lake.

The younger Bushong surmises that the popularity of fishing and heavy lake pressure from tournaments, among other things, have likely resulted in the harvest of most fish that could have otherwise grown to “hog” proportions. He discussed the fete last week with a friend, Ray Grisham of Gainesville, who also regularly fishes on Bull Shoals. Grisham insists the record won’t be broken.