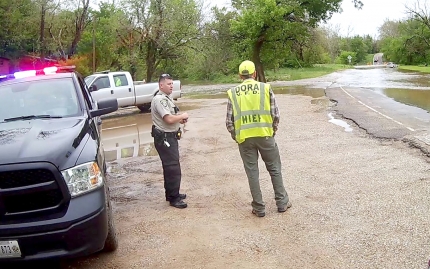 A 41-year-old woman from out of state drove into high water on Highway 181 Sunday afternoon at Hodgson Mill and became trapped in her SUV when it got caught in a ditch hidden below the rapidly rising Bryant Creek. Unfamiliar with her surroundings, she called 911, and was surely relieved when, within three or four minutes, she saw Ozark County Deputy Sheriff Seth Miller coming toward her in his patrol truck.

“I was in Dora when the call came in, so I was the first one there,” Miller told the Times Monday. The female driver, whose name has not been released, was passing through from a northern state, Miller said, and she “didn’t know the roadway.”

The officer saw that the water was rising “fairly fast” but also believed he could get to the woman safely in his truck. He drove alongside the woman’s SUV and helped her out through the window.

The sheriff’s dispatch call log shows the call came in at 1:28 p.m. Sunday, and at 1:40, Miller reported that he had gotten the driver out of the vehicle.

Caney Mountain and Dora Volunteer Fire Departments also responded to the scene. Barricades had not been set up on the roadway, Miller said. A post on the DVFD Facebook page said the bridge over Bryant Creek was “completely impassable” at the time due to high water. The woman apparently tried to turn around, not realizing “the water at the side of the road was significantly deeper,” the post said.

Responding to another post about the incident on the Ozark County Sheriff’s Department Facebook page, one commenter said she watched as “10 plus cars tried going through and then backed up.”

Miller said the woman, who was uninjured, was taken by fire department personnel to a relative’s house, perhaps in Arkansas. The SUV was towed by Duke’s Towing.