Fifty-seven years later, back at the courthouse 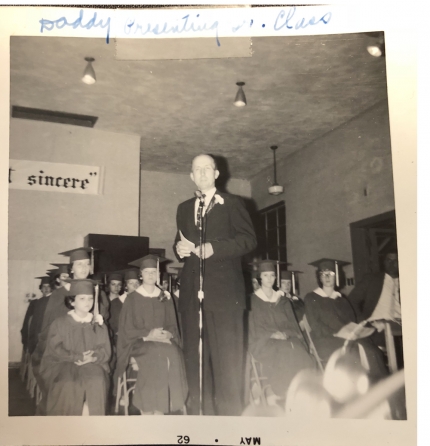 Gainesville school superintendent Mearle Luna, who held the post for 26 years, presenting the senior class of 1962, the last class to graduate in the “old” building before high school classes moved to the current high school building in 1963.

Editor’s note: The Ozark County Times is a nonpartisan newspaper that does not endorse candidates or take sides on issues. However, Times staffers sometimes express their own personal opinions in clearly identified writings. This is Times editor Sue Ann Jones’ opinion about the upcoming Gainesville school levy election.

A little over 57 years ago, on March 15, 1961, I was a 9-year-old kid standing by my dad in the Ozark County Courthouse, anxiously watching as votes were counted in a school election. The thing I remember most about that night was the moment when my dad, Mearle Luna, looked at the other people in the room as the latest tally was announced from one of the outlying communities.

“Boys,” Daddy said with a smile as wide as Texas, “it’s gonna pass!”

He was superintendent of the school system, and that night was the seventh time – the seventh time – the Gainesville School District had asked voters to approve a $238,000 bond issue to build a new high school. In its March 23, 1961, edition, the Ozark County Times reported the totals of the six previous bond-election failures – three elections in 1958, two in 1959 and one in 1960. Ironically, a majority of district residents had voted for the proposition in every one of those elections – but not enough to give the proposal the two-thirds approval the bond issue needed.

It was a difficult decision for some families. There were dozens of reasons for voting against the proposal. For one thing, building the new high school meant closing the last of the rural one-room elementary schools and busing their students into town. Those little schools had been the heart of those communities for generations. Understandably, it was hard to make that choice. But those voters knew times were changing and that, sooner or later, that hard choice had to be made.

One thing that probably helped the issue pass was that voters were given an additional choice. In that election in March 1961, the Gainesville school board asked district residents not only to approve bonds to fund the new-school construction but also to choose where it would be built. Voters had a choice of two proposed sites: one, the “Bushong-Ball Park site” was near the Gainesville Memorial Airport on what was then Highway 160. The other was the “Newt Martin property,” a big field on the east side of Highway 5 north of the Gainesville city limits – a short distance from where The Center stands today.

The Times reported the vote: 554 for the Bushong site, 311 for the Martin land. That decision was a relief to Martin. He hadn’t wanted to sell the field, which adjoined his front yard. But he agreed to let it be put to a vote because his only child, a longtime Gainesville teacher, had asked him to do it, hoping the choice would finally help the proposal pass. I know this because Newt Martin was my grandpa; his beloved only child, Stella Luna, was my mom.

A few months later, in July 1961, the Times reported that the Gainesville total school tax levy was $2.85 per $100 assessed valuation.

There are no words to adequately express how proud Daddy was of that amazing new high school when it opened in 1963. It was so big, so modern! Its gym was huge – twice as big as the little cracker-box gym at the old school (which now is the Gainesville post office). It had a real cafeteria and a high-tech kitchen with a walk-in refrigerator. And the best part, for Daddy, was that the new school had a real, dedicated library.

And now here we are, a little more than a half century later. The school that was once a regional showplace is showing her age. Her layout is flawed; her utilities need updating. Her gymnasium –where Daddy’s funeral was held five years after the school was built – has bleachers with no accommodation for spectators in wheelchairs or grandparents with bad knees and hips.

And now, once again the school district is coming to residents after previous failed elections, asking for a yes vote when there are dozens of reasons to vote no.

Some say the proposed 75-cent increase in the school levy is too big, too high. The increase would bring the current $2.75 levy, the state minimum, up to $3.50. I’m guessing those voters 57 years ago thought a $2.85 levy was high too. But I’m so glad they tightened their belts and pinched their pennies and did what they needed to do for the kids of their district. I’m one of those kids. And I know many of you are too.

Other folks say the high school building is too old and should be razed and replaced. But the district has had the old girl examined by architects and engineers who say her bones are good and, with some wise additions, appropriate updating and careful repairs, she can last another 55 years.

I live in a house that’s several years older than the Gainesville High School building. It’s been through various phases of disrepair in its nearly 70 years. But then someone came along who recognized it had good bones. He and his wife bought it, repaired the damage, braced up the broken parts, modernized the utilities and gave it the TLC it needed to become comfortable and sound again. I bought the house from them a few years ago, and I’m doing my best to care for it so it lasts another 60-plus years.

In 2001 in Florida, my daughter graduated from what is said to be one of the South’s oldest high school buildings. Its first students reportedly arrived in 1882. It’s been regularly updated and carefully maintained, and by all indications, the grand old school will keep serving students for many years to come. Old things can last if their owners take care of them.

Tuesday is the election. A simple majority is needed to pass the 75-cent levy increase the Gainesville School District is requesting. When your votes and mine are tallied that night, I’ll be back at the courthouse, covering the story for the Times. I’m hoping, at the end of the night, I hear someone say, “Boys ... I think it’s gonna pass!”