New boating law requires use of engine cut off switches 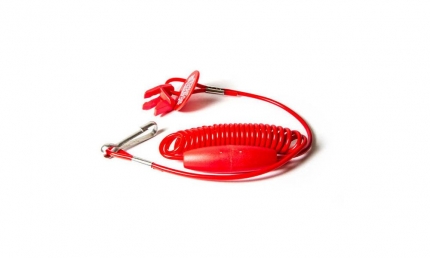 photo courtesy of West Marine A new law requires most boaters to use their emergency cut-off switches through a link lanyard like the one pictured above.

As of April 1, those driving boats that are less than 26 feet in length and powered by motors of at least 3 horsepower are required to use their engine cut-off switches (ECOS) while operating the boat. The new law, instated by the US Coast Guard, will likely affect many Ozark Countians, who will now need to wear a safety lanyard that links to their ECOS while driving their boat.

The lanyard link is usually made from a coiled bungee cord that clips onto the boat operator’s clothing. The other end is attached to the cut-off switch. So if the driver is somehow pulled away from the typical boat operating area, the lanyard disengages from the ECOS and the motor automatically shuts down.

The new law is aimed at helping prevent runaway boats if the driver is thrown overboard or falls inside the boat.

“Using the [ECOS] is required only when the primary helm is not within an enclosed cabin, and when the boat is operating on plane or above displacement speed,” according to a news release from the Coast Guard. “Common situations where the [ECOS link] use would not be required include docking/trailering, trolling and operating in no-wake zones.

“The Coast Guard believes that the overwhelming majority of recreational vessels produced for decades have an ECOS installed, so this new use requirement simply obligates recreational vessel operators to use critical safety equipment already present in their boat,” the new release says.

Boaters who have older vessels that were built before January 2020 that do not have a ECOS installed are not required to install one.