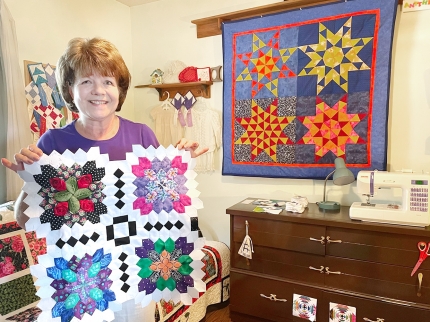 Looking at the collection of quilts made by Barbara Sympson Freeman of Dora, now on display at the Ozark County Historium, one simple fact quickly comes to mind: these quilts have lots of little pieces. While the same can be said of many patchwork quilts, in Barbara’s case the key word is “little.” In fact, she says that is what she loves most about making quilts – cutting up scraps into many little pieces to use them up.

“People give me bags of scraps, and I’m just like a kid at Christmas,” Barbara smiles. “There are all kinds of patterns and colors, and they don’t seem to match, but when you cut them up into pieces for a quilt, it doesn’t matter. It just works! Rarely do I find a piece of fabric I won’t use.”

Barbara lives near Dora with her husband Ron, on the farm alongside Bryant Creek where he grew up with his parents Earlene and the late Don Freeman. And although her parents, Ian and Doris Sympson, lived in West Plains where they raised their two daughters Barbara and Ruth Ann, Barbara’s roots are also deep in eastern Ozark County. One set of her great-grandparents were George and Manda Gormley Hodgson. George was the brother of Alva Hodgson, and the two men built Hodgson Mill, which George later operated until he died.

For many years, Barbara has been a legal secretary, working for attorneys Newt Brill and Ken Wagoner in West Plains. As she began to contemplate a future retirement, in 2013 Barbara decided to pursue a hobby. Her friend and fellow quilter Linda Smith helped her get started quilting, and it did not take Barbara long to fall in love with the craft. Now, nine years and many finished quilts later, she is deeply committed to her chosen hobby and spends lots of time pursuing it. Her quilts are certainly a testament to her success, in their intricacy and beauty.

“I’m not completely retired yet,” she noted, “but when I’m not working, I’m sewing. Just ask Ron!”

As with any art form, there are many different paths that can be followed to produce a finished quilt and many types of quilts to make. Barbara has tried lots of techniques, including hand piecing and hand quilting, applique, paper piecing and machine piecing. She has made bed-size quilts, baby quilts and all sizes in between. At the end of the day, she has discovered what she enjoys most is making quilt tops with lots of intricate piecing accomplished on her sewing machine. Usually her friend Linda Smith’s husband Gary finishes her projects by quilting them on his long-arm machine.

The tradition of quilting is one that has been passed down in Barbara’s family; she is the proud owner of several vintage family quilts including a friendship quilt made for her grandfather which is lovingly displayed in her home.

“My grandfather, Walter Larkin Sympson, was a mail carrier, who had a route through Pottersville,” she explained. “The families on his route must have thought a lot of him because they got together and made him a quilt, embroidered with their names. I know several of these families and their descendants.”

As she points out several other inherited quilts made in time-honored patterns and vintage fabrics, Barbara said simply, “This is my legacy.”

As she makes 21st-century quilts, Barbara is also creating a legacy for her own family. Ron and Barbara have two sons, Justin and Brett, and five young grandchildren, Molly, James, Lilly and twins Addie and Evie, to give her constant inspiration.

Barbara is also generous with her quilts outside her family. For example, each November she donates one of her special creations to the St. Paul’s Lutheran Church crafters’ group for a fundraiser at their annual Christmas craft show and sale in West Plains.

Barbara Freeman’s beautiful quilts will be on display at the Ozark County Historium for a few months and are available for viewing whenever the facility is open. Currently, the hours of operation are from 10 a.m. to 2 p.m. Wednesday through Friday of each week.

The exhibit is free and open to the public.

For information about the quilts or any other project of the Historium, call 417-679-2400 or email at ozarkco1@ozarkcountyhistory.org.